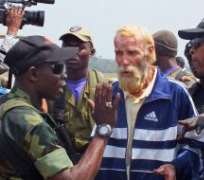 The Nigerian Army has arrested a white man among Boko Haram insurgents in the Sambisa Forest.

A soldier has disclosed that hundreds of Boko Haram fighters were killed during the offensive to liberate Sambisa forest.

According to the Nigerian Television Authority (NTA), a soldier, who took part in the operation that liberated Sambisa Forest said the foreigner whose nationality has not been disclosed, was arrested inside the forest on Thursday, December 22, when troops cleared Boko Haram insurgents out of their last fortress.

The soldier who made the disclosure on Sunday, December 25, said hundreds of Boko Haram fighters were killed during the offensive that began about a month ago.

The source added that many others were captured alive while attempting to flee.

“Hundreds of Boko Haram captives, including men, women and children have been freed and taken to safety.

“All I can tell you is that no big Boko Haram commander is alive in the Sambisa; we are in control of the forest.

“It took months of planning and mapping because of the size, difficult weather and other factors in the Sambisa Forest,” he said.

The Soldier said major factors that delayed the takeover of the insurgents' stronghold was the thousands of people, including those living in villages around the vast forest that were being held as human shield by the Boko Haram leaders.

According to the source, the army deployed 4,200 troops to Sambisa Forest through various fronts, including Ngurosoye, Konduga/Aulari, Bama, Fulka and Damboa.

The soldier said while the operation lasted day and night, mine detectors cleared the way for troops to move in to confront the insurgents, who were equally well armed with sophisticated fighting equipment.

President Buhari in a goodwill message to the troops on Saturday, December 24, expressed his excitement and gratitude over the news which he said was delivered to him by the Chief of Army staff Tukur Buratai.

The Boko Haram's Camp Zero as the military called it fell at about 1.35pm on Friday, December 23.