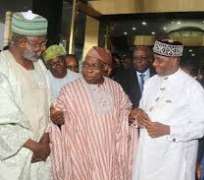 Primate Babatunde Elijah Ayodele of the INRI Evangelical Spiritual Church has released his prophecies for 2017 and urged the country to pray in order to avert disaster.

Ayodele urged the Igbos to align with a strong political party as their time to produce the presidency is not here yet.

He also said the former president Olusegun Obasanjo would be playing his last politics in the country, while President Muhammadu Buhari will face a lot of disappointment even though he means well for Nigeria.

Primate Ayodele releases 2017 prophecies
Read some of his 2017 prophecies below:
Nigeria will sign agreement with Germany, France and United States of America on terrorist. President Buhari will face a lot of disappointments among his trusted aides and political associates. There are lots of changes he will want to implement but he will suffer setback.

He means well for Nigeria and has good plan for the country but there are a lot of people surrounding him that will mislead him and don't want him to succeed. Despite the effort of his government, there will still be problem between his political admirers. I also foresee political tension in Kwara, Kogi, Ogun, Oyo, Ondo, Kano, Sokoto, Kaduna, Kebbi, Zamfara, Benue, Pleteau, Edo and Yobe states.

The Igbo should form an alliance with a strong party their time has not yet come. They will not win the presidency in 2019. South west may be cheated politically. South-South may lag behind except they rise up and they come in one voice.

I foresee that Buhari will have issues with some past head of states and he should pray against health challenges. He should pray so that he is not bereaved. I foresee the death of any former civilian and a former military leader in Nigeria. Let us pray to rebuke the death of a Minister and also a very prominent politician. Let us pray to God to grant all the former Presidents in Nigeria good health.

Goodluck Jonathan will be involved in the moves to bring the PDP back to political reckoning. I foresee that President Buhari and Asiwaju Bola Tinubu will hold meetings on ways to re-strategize concerning the All Progressives Congress but the outcome may not work as expected because Buhari will not listen to the right people. President Buhari will hold consultations on ways to appoint new Ministers or re-shuffle his cabinet but I foresee that he will still not get it right.

Buhari will misbehave. Minister of Labour, Communication, Energy and Transport must be prayerful and careful about their work. The Minister of Finance will face challenges. Let all the Ministers pray to rebuke accidents among them. I foresee mass protest against the government of the day. Buhari will form new political associates with some South west political leaders that will ouster Asiwaju Tinubu. The Spirit of God says President Buhari and Asiwaju Tinubu will part ways. I see the re-emergence of the Fulani Herdsmen troubles in Igala land, Benue and Taraba states. I see killings in Nigeria and this will affect the offices of the Service Chiefs in the military.

Lets pray to rebuke earthquake and landslide in Nigeria. There will be flooding in some parts of Lagos, Ogun, Enugu, plateau, Kogi and Benue states. The economy will improve a little bit and will later experience some downward movement. This will continue until the government is ready to do the right thing. The Spirit of God says there will be series of political consultations in the country, the outcome of which may ruin the political fortunes of some politicians.

I foresee that through the media the Economic and Financial Crimes Commission (EFCC) will announce the names of some people involved in corrupt practices. Buhari and Minister of Transport will quarrel. Nigeria will borrow money because our foreign reserve will not perform as expected. Let us pray we don't lose any ambassador. I foresee technical troubles with the Presidential jets in the months of April, May, June and August.

I foresee doctors going on strike. There will be political assassinations in Nigeria and some African country. Let us pray we don't lose a prominent Professor.

The Biafra will cause Buhari's government a lot. Nnamdi Kanu should be released because he may have ill health in the prison and also Dasuki. I foresee changes in custom, Chief of Staff to the President and the Secretary to the Government of the Federation. Some of Buhari aides will be changed.