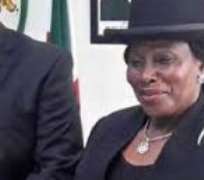 The Enugu State House of Assembly has confirmed Justice Ngozi Emehelu as the substantive chief judge of the state.

The confirmation of Emehelu, who had been in acting capacity for two and half months, was approved on Friday during plenary when she appeared before the legislators.

The Leader of the House, Chief Ikechukwu Ezugwu, representing Udenu State Constituency, described Emehelu as a woman of integrity with an outstanding character.

Ezugwu said that the judge had been in the legal profession for 35 years, adding that she had served in several election petitions tribunals due to her impeccable character.

“She is a woman of integrity with what we know. We have not had any complaint since she was appointed in acting capacity.”

Ezugwu moved a motion for the legislators to confirm Emehelu as the substantive chief judge.

The Speaker, Chief Edward Ubosi, then announced the confirmation of Emehelu as the substantive chief judge of the state, following a voice vote.

The News Agency of Nigeria (NAN) reports that Emehelu is expected to be sworn in by Gov. Ifeanyi Ugwuanyi, following the confirmation.

The appointment of Emehelu followed the sacking of her predecessor, Justice Innocent Umezulike on the recommendation of the National Judicial Commission.