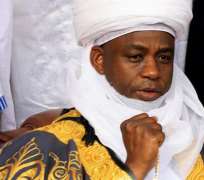 The Sultan of Sokoto, Alhaji (Dr.) Muhammad Sa'ad Abubakar III has expressed delight at the level of popularity Governor Ifeanyi Ugwuanyi of Enugu State enjoys from the people of the state including non-indigenes, saying that it is commendable.

The Sultan, who spoke during an interactive meeting with the Muslim community resident in Enugu State, noted that his observation since he visited the state shows that Gov. Ugwuanyi is so much liked by the people because of his humble disposition and commitment to their wellbeing and good governance.

He charged Muslims in the state to be law abiding and endeavour to live in peace with one another especially their host communities, reminding them that Islam does not allow them to engage in illicit affairs that could undermine the peace and progress of the state.

The Sultan had earlier met with the Christian leaders in the state, where issues bordering on peace, national unity, security and harmonious existence between the Muslims and Christians were extensively discussed.

Addressing the Muslim Community, the Sultan also challenged the security agents to fish out those people who kill in the name of herdsmen, arguing that they are 'criminals not Muslims'.

'I am excited that 95 percent of Muslims in Enugu State are in support of Governor Ugwuanyi and what he is doing to promote peace, security and good governance in the state.

'The security agents have a lot to do in protecting the lives and property of the people. Now people walk into your communities, kill people and walk away, nobody intercepts them. They are criminals not Muslims.

'Form your own committee to fish out those who infiltrate the areas you reside. Find out those engaging in illicit affairs and report to the security agencies to take appropriate action', the Sultan advised.

He also called for the constitution of a committee that would adjudicate between herdsmen and farmers in the event of any misunderstanding, adding that the governor has done well in the promotion of security, peace and national unity.