Ibori Made Ministers, Governors, Speaker, Others While In Uk Prison – Senator nwaoboshi 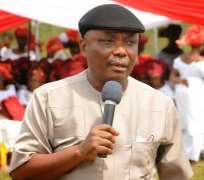 Nwaoboshi, who said he travelled to London after Ibori's release to  congratulate him on his release from prison, disclosed that Ibori sat right there in his cell in UK prison and made his daughter a member of the House of representatives.

Joining other supporters to felicitate with Ibori on his release from prison, the lawmaker said, “My names are Distinguished Senator Peter Nwaoboshi. I left Nigeria yesterday because of my boss.”

“James Ibori is my brother, he's my boss and somebody am very well…loved.”

Amid cheers from those around, he continued, “Let me make one point. All of you who are here today, you have come because of James ibori.

“There are many people who have been made governors and as soon as they paid their governorship fees, nobody remembers them.

Nwaoboshi carried on, “There are many people who have been Governors, who have never even been opportune to make their successors, but James Ibori made his successors.

“And there may never be a governor in history again who will sit in his cell or in prison and make a governor.”

At this point, a thunderous applause and cheering erupted from the background.

The Senator went on to say, “There may never be in history again of a governor who will sit in prison and make senator.

“I said there may never be in the history of Nigeria again of a governor who will sit in cell and support a Senate President.

“There may never be any Nigerian man who can pass through the tribulations you have passed through today and come out, and everybody will be flying…when I was flying, a security agent told me I know you are going because of James Ibori, I said, I am going because of James Ibori and there is nothing you can do to me because I have the authority to travel. If you want crisis we create it in the airport.”

“Then I know those he has served a lot of things but who have forgotten him today.”

The former governor interjected on him by saying: “I’m the father of all.”