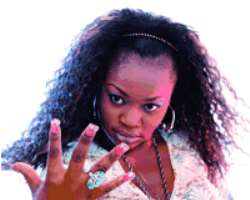 Her name is Peju Taiwo, but she is popularly known as Easy Lizy. She is really an easy-going person trying diligently to make a name for herself in show business.She's hardworking and seeking an opportunity for breakthrough. In the process, she has been entertaining her fans, but not without scathing remarks from critics. Is she dating Obesere or did she date Obesere?Find out her reactions in this exhaustive and thrilling interview.
Excerpts:

What is your kind of music?
I am not an R'n'B singer. I am more of a fujipop singer. You may be wondering what fujipop means. It is the fusion of fuji and hip hop genres of music . That was how the name fuji-pop was born.

How has the response been?
Well, I am still working on the acceptance, but so far so good .The response has been positive and as you may know, for your music to be accepted, you have to do a lot of promos and publicity. So, that is what I have been working on.

How many albums have you released in the past?
I have one album titled Show Your Logo under Stingomania Records.

How did it perform in the market?
The response we got was positive.

What has music done for you?
Music has taken me to places, it has made me meet wonderful people (celebrities) and it has given me fame.

What are the disadvantages music has brought you?
Sometimes, I might feel like going to some places but I wouldn't be able to go because I am Easy Lizzy. Normally, I could have gone there, have fun and do whatever I wanted to do and even act crazy but because of the Easy Lizzy brand, I have to watch out and be careful with the places I go and the things I do.

When did you start music?
Professionally, it's been four years.

How did you start?
I've had a passion for music ever since I was a kid but I took it up through a friend that works as a producer. Every time I paid him a visit , I am amazed at what he does with music especially when he is producing other people's job. I became interested in it and when I wrote a song, he was there to produce it and so it all started like a child's play but turned out to be real. It was not something I determined to go into, so at the beginning, it was just there but as time passed, I had to take it more seriously. I began to face some challenges here and there but since it is my passion, I was determined to stay focused and strong to end.

What is your relationship with Obesere?
We are both musicians. That is one relationship that we share; aside that, I see him as a godfather, because he is so passionate about me and wants me to succeed and it is so normal to show interest in someone that wants your success. We are just musicians, that's all we share.

But some alleged that it was romantic, how true?
Everyone is entitled to say anything they like.

What about you, Puffy T and Pasuma?
I have the same relationship with them as I have with Obesere, music . Puffy T is a producer, Pasuma is an artiste. Whatever we do is purely music that's all.

So, tell me, how far did you go education wise?
I had my ND at Yaba College of Technology and I went to UNILAG to study Political Science but one way or the other, I had to stop due to some personal reasons. That's the only regret I have and I am still going to work on that.

Does Easy Lizzy have a boy friend?
Of course I do. If I don't have one at my age, then I guess I have to sit right.

What does he do?
I don't want to disclose that, I just want him to be.

Is it Ovis Tee?
It's not Ovis Tee. What we have going is that we are colleagues in the label and he is a friend of mine. We are just close.

But some brothers and sisters do what they are not supposed to do, do you guys do such?
No, we don't do anything we shouldn't do. We don't do more than a peck and maybe a hug. All in all, we are not dating.

What else are you working on musically?
I just released my album and now I am trying to work on a new video titled Show me wat you've got. I picked this song because every time I listen to it, I feel my strength and people have been saying that of all the singles I have produced, I am always featuring one artiste or the other. But Show me wat you've got is exceptional. I did it all by myself, no Pasuma, no Obesere.

Why have you been doing “collabo” with Fuji artistes?
Maybe because I flow better with them. I have plans to work with hip hop artistes, but for a start, I think I would go all the ' fuji ' way since my brand of music is a fusion of fuji and hip hop. I decided to focus on the fuji side and as time goes on, I would do more with a couple of hip hop artistes.

Do you think Stingomania is strong enough to take you there?
Yes, Stingomania has what it takes with the grace of God.

Where and when have you performed?
I have performed in places like Abuja , Akure and several other places in Lagos .

Have you really got 'big money' from this?
Nope.

They say, it is really tough for an upcoming artiste to find his/her bearing in this part of world, how true?
Yes, it is very true. The economy of the country is one thing on its own and there is this courtesy thing and I feel we would all get there but for now, it is 'very very' rough not until when you break into limelight. For upcoming musicians, the road is very tough and rough because to get full acceptance is something that takes the grace of God and hard work but if you stay focused, as time goes on, you'll get there.

How did your parents react when you went into music?
My father is dead.He died six years ago and that was before I took music professionally. It was tough with my mom because she is a pastor and she wasn't ready to see her daughter do secular music.

When was the first time you had a kiss?
I can't remember but I know I was very young then.

How old is Easy Lizy now?
I'm in my late twenties.

When was the first time you got down with a man?
I was very young.

How young, because they say women never forget that?
I have forgotten, because I have a lot of things to think of.

Why did you and Obesere break up?
Did I tell you we dated?

Because when you said Obesere knows, why could he have known without you dating him?
Because he understands me that much, because I am like a sister to him, because he knows me, he knows my relationship so he can testify to that.

So can you swear and say you did not date Obesere?
To God, I have not dated him .

What will make you date a man?
It depends on my heart, my interests, my feelings toward that man. So if I love him, I will.

What will make you sleep with a man?
My feelings too, not money.