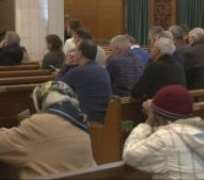 A Boston church experienced Christmas a week early when an anonymous donor gave the church a winning $100,000 lottery ticket with no strings attached.

“In a lot of ways it's kind of like they gave us Christmas,” Fr. Tom Conway, executive director of St. Anthony's Shrine in Boston, told ABC News. “It's very touching and very generous.”

Conway said the donor, who wished to remain anonymous, had been in touch with the shrine's director of development for a few weeks and brought the winning ticket to the shrine on Monday.

Conway, dressed in his Franciscan habit, and the director of development, Maryanne Rooney-Hegan, then took the ticket to the Massachusetts State Lottery office in Brainbridge. Conway described it as a surreal moment.

“I'm there with a habit and a $100,000 ticket and everyone else is cashing their smaller cash winnings,” he said with a laugh. “The joke is that it's not something that they teach in the seminary, but these things happen.”

The church took home $70,000 in a lump sum payment after taxes. It is home to 28 Franciscan Friars and is financially independent from the Catholic Church, according to Conway.

The donated ticket was purchased at Cal's News in Lynn, Massachusetts, a lottery spokesman told ABC News. The store is located about 30 minutes from the shrine.

“The donor didn't ask for any of it back but just said it's yours, I just want to give it to you,” Conway said. “It's really pretty remarkable.”

The $70,000 will be used to cover the shrine's annual Christmas activities, which include buying groceries for 500 needy families, hosting a post-Christmas dinner for veterans and paying musicians who perform at the shrine's 14 Christmas weekend services.

The money will also help pay for Christmas presents for children, including one young boy who touched the hearts of Conway and the shrine's staff and volunteers.

“A 5-year-old boy who came in with a woman for groceries was crying and one of our volunteers asked why,” Conway recalled. “The woman said he's been in a foster family for two weeks and he's afraid that Santa won't be able to find him.”

“We're going to make sure that this family has a nice Christmas,” he said. “The lottery money will take care of it.”