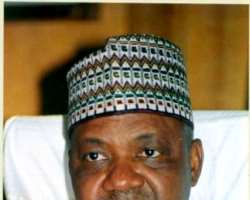 Namadi Sambo
The governor of Kaduna State, Alhaji Namadi Sambo, who has been nominated to fill the vacant post of Vice President, has been dragged before the Economic and Financial Crimes Commission over allegations of financial impropriety.

But Sambo who spoke through his Chief Press Secretary, Alhaji Umar Sani, has dismissed the petition describing it as frivolous and lacking in credibility.

A Kaduna-based lawyer, Sadau Garba, petitioned the anti-graft body asking that the governor be investigated for allegedly misappropriating N153.6bn with the support of the state legislature.

A copy of the petition which was obtained by our correspondent on Saturday alleged among other things that the N1.2bn spent by the state government in hosting the U-17 World Cup championship was yet to be accounted for.

Nigeria hosted the championship in 2009 and Kaduna State was one of the states where the tournament was held.

The governor whose name has been forwarded to the National Assembly for consideration and confirmation as the Vice-President was nominated by President Goodluck Jonathan on Thursday night after he had a meeting with Peoples Democratic Party governors.

He added that the petitioner needed to be examined to determine whether his claims had any substance.

But in the petition, Garba averred that the state obtained a $17.32m loan guaranteed by the Minister of Finance from the Islamic Development Bank, but that the loan was not captured in the 2009 budget as required by law.

He also accused security operatives of acting out the script of the state government by harassing him on account of the petition.