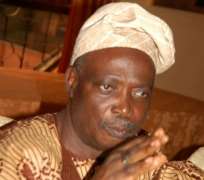 The Economic and Financial Crimes Commission (EFCC) yesterday re-arraigned a former Governor of Oyo State, Senator Rashidi Ladoja and one of his former aides, Chief Waheed Akanbi, over alleged N4.7billion fraud before Justice Mohammed Idris of a Federal High Court in Lagos.

They were re-arraigned on an 8-count charge bordering on money laundering contrary to Section 17(a) and punishable under Section 14(1) of the Money Laundering (Prohibition) Act, 2004.

The duo however pleaded not guilty to the charge and were later granted bail on the existing conditions given by Justice Ramat Mohammed who had earlier presided over the matter.

Justice Idris however adjourned the matter till February 14, 2017, for trial.

EFCC had earlier in November 2008 arraigned the duo on a 10-count charge over the alleged offence before Justice Ramat Mohammed, who was then serving at the Lagos Division of the Federal High Court.

In the charge, the EFCC alleged that the defendants conspired to convert properties and resources derived from an illegal act, with the intention of concealing their illicit origin.

The commission also alleged that Ladoja used N42 million out of the proceeds to purchase an Armoured Land Cruiser Sports Utility Van and remitted about £600,000 to one, Bimpe Ladoja in London.