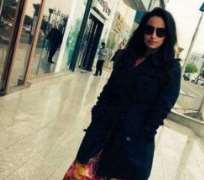 The Saudi woman was going out for breakfast when she decided to make a statement. Violating the country's moral codes, she reportedly stepped out in public wearing a multicolored dress, a black jacket and ankle boots — without a hijab or abaya, a loosefitting garment.

Late last month, she tweeted a photo of her outfit, and the post circulated through Saudi Arabia, drawing death threats and demands to imprison or even execute the woman.

On Monday, police in the country's capital of Riyadh said they had arrested the woman, following their duty to monitor “violations of general morals,” a spokesman, Fawaz al-Maiman, said, AFP reported. The woman, who is in her 20s, was imprisoned after posting the tweet of herself standing next to a popular Riyadh cafe, he said.

He also accused her of “speaking openly about prohibited relations” with unrelated men, according to AFP.

“Riyadh police stress that the action of this woman violates the laws applied in this country,” Maiman said, urging the public to “adhere to the teachings of Islam.” Saudi women are expected to wear headscarves and loosefitting garments such as an abaya when in public.

The spokesman did not name the woman, but a number of websites identified her as Malak al-Shehri, whose tweet drew international support on Twitter and Facebook two weeks ago. Some referred to her as the “Saudi Rosa Parks,” comparing her to the American civil rights activist who was arrested for refusing to give up her bus seat to a white passenger.

According to a woman interviewed by the International Business Times , Shehri had tweeted about her plans to go to breakfast without a headscarf or abaya, and her followers asked her to post a picture. The tweet and photo were posted from her account @AngelQShe, which was later deleted.

Follow
Anon #FreeMalak @dontcarebut
A Saudi woman went out yesterday without an Abaya or a hijab in Riyadh Saudi Arabia and many Saudis are now demanding her execution.

Shehri, whose first name means angel, soon received hateful messages, including many with the hashtag “we demand the imprisonment of the rebel Malak al-Shehri.”

One account tweeted “we want blood.” Other users wrote, “Kill her and throw her corpse to the dogs” and “The least punishment for her is beheading her.”

Once the news of her arrest was released, some tweeted in approval of the authorities' actions. One user wrote that he was thankful the woman was arrested, and demanded harsh penalties. “The country's system has not been respected,” he wrote.

Yet many others praised her bravery and defiance, criticizing Saudi Arabia's requirement that all women wear loosefitting abayas.

Follow
Moudhy Al-Rashid @Moudhy
If I lived in # SaudiArabia , I could only hope to show the courage, defiance & resilience as Malak Al-Shehri who deserves a medal, not prison https:// twitter.com/monaeltahawy/s tatus/808329709134237697  …

— Nora Jaber (@noraj27) December 12, 2016
Women's rights activists have criticized the country's other strict requirements for women, such as its ban on women driving; it is the only country in the world with such a prohibition. Saudi women are also required to obtain permission from a husband or male relative to receive a passport, travel outside the country or marry.

Despite these long-standing moral codes, a number of key milestones have taken place in the past year for women's rights in the country. For the first time in the country's history, women were allowed to vote  during last December's municipal elections.

In September, more than 14,000 Saudi women  signed a petition  calling for an end to the country's male guardianship system.

Late last month, a billionaire Saudi prince took a striking stance against the country's rule prohibiting women to drive. Prince Alwaleed bin Talal, a member of the Saudi royal family, posted a four-page-long opinion piece on his website and linked to Twitter, declaring his belief that it is “high time” that Saudi women start driving cars.

In Iran,  a similar case took place last year involving photos posted on social media. Iranian actress Sadaf Taherian said  she had to leave Iran after threats were made against her for her decision to post photographs of herself on social media without a headscarf. A popular TV show starring the actress was abruptly pulled from the state television network schedule. Then, the Iranian government officially denounced Taherian as an “offender.”

When another popular actress defended Taherian on social media, a spokesman for Iran's ministry of culture and lslamic guidance said the two actresses would be barred from acting. “As far as this ministry is concerned, these two individuals are no longer considered to be artists any more and do not have any right to act,” the spokesman said.