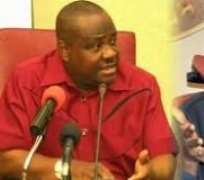 Governor Wike also called on INEC to immediately release the results of Andoni /Opobo-Nkoro Federal Constituency and Andoni State Constituency also won by the PDP. In an interactive session with journalists on Sunday , Governor Wike said it has never happened in the history of elections that the Rivers East Senatorial District result declaration exceeded 24hours According to him , the result of Rivers East has been held down by the plots of INEC , the Army and the Police to manipulate the results of Emohua and Ikwerre Local Government Areas for the purpose of concocting the senatorial results in favour of the APC .

He said: “As I speak with you, they are doing everything possible to rewrite the result of Emohua Local Government Area to ensure that the APC wins”. The governor said that since the conclusion of voting, INEC has been playing pranks, moving collation back and forth from Emohua to Port Harcourt to create room for rigging.

INEC should release Andoni/ Opobo-Nkoro Federal Constituency where Abiante has won and Andoni State Constituency where Ikunyi Ibani has won clearly “, he said. He described as unfortunate the deliberate use of the Nigerian Army to deny PDP agents access to collation centres , so that INEC staff can concoct results. “It is most unfortunate that that they will descend to the level of win at all costs”, he said .

The governor reiterated his statement that the Nigerian Army and SARS personnel were deeply involved in the violence that characterised the elections , pointing out that the violence claimed five lives in different parts of the State . He said that the half hearted denial of the military evaporates in the face of overwhelming evidence of their misconduct during the polls. “When the security is apolitical , you have free and fair elections . But when the security descends into the arena, the entire process is compromised”, the governor noted.