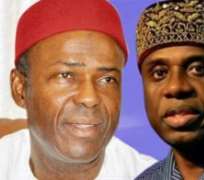 The Federal High Court sitting in Abuja has granted an order of Mandamus seeking the arrest and sack of the Minister of Transportation, Rotimi Amaechi and Minister of Science and Technology, Ogbonnaya Onu, over allegations leveled against them by two Justices of the Supreme Court, Justices Inyang Okoro and Sylvester N. Ngwuta where the Justices accused the two of offering them bribe to influence court decisions. Onu and Amaechi The application was brought by Human Rights Foundation International (HRFI)who also asked that the Court compel the Economic and Financial Crimes Commission (EFCC) and the State Security Service (SSS) to arrest and prosecute both ministers.

Recall that Justice Ngwuta, in a letter dated October 18, which he forwarded to the then Chief Justice of Nigeria, CJN, Justice Mahmud Mohammed and the National Judicial Council, NJC, specifically fingered the Minister of Transport, Mr. Rotimi Amaechi and Minister of Technology, Dr. Ogbonnaya Onu, as those that approached him with financial bribe on behalf of the APC, asking him to rule in favour of them in the Ekiti, Rivers, Ebonyi election cases.

He had also said that shortly after the Supreme Court affirmed the election of Governor Nyesom Wike of Rivers State, Amaechi also called him on phone and said “Oga is not happy”.

However, Amaechi had in a statement  described the embattled judge as a drowning man desperately shopping for anything to latch on. Amaechi had equally said that the man merely concocted the tissues of lies against him in order to divert the public attention from the weighty evidence of corruption against him by the DSS. Also, in defense of Technology Minister, Barrister Ode who was a former member of the defunct All Nigerians Peoples Party, ANPP which was chaired by Onu, in a statement in Abuja had stated that “The allegation of Justice Ngwuta in my considered opinion is short of the truth and further reveals the ranting of a drowning man who under survival instinct can hold on to anything whether it is helpful or not.”

He said,  “As a former member, Board of Trustees of the defunct All Nigeria Peoples Party, ANPP, who had worked closely with Honorable Minister who was also a statutory member of the Board then, being the National Chairman of the ANPP then, I believe strongly that Dr. Onu would not do anything that's capable of diminishing his hard-earned and long established integrity. Barr. Ode equally stated that “He (Onu) is one gentleman whose character and reputation, I can vouch for. In fact, it is on this note that the good people of Yala Local Government Area in Cross River State, where I come from, considered him worthy for a highly revered chieftaincy award-“Okumade 1 of Yala Nation”, meaning “a pace setter of Yala Nation.”

However, in the relief sought under the Presiding Judge, Justice Ahmed Mohammed by the plaintiff, it raised the questions of “Whether or not the allegation made by Justices Inyang Okoro and Sylvester N. Ngwuta in connection with the criminal-like invasion of their houses by the DSS on allegation of corruption, which the matter is already in the public domain, should be investigated and those arrested be prosecuted by the third and fourth defendants…” among others. The matter was adjourned till the 15th of December for mention.