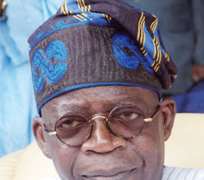 The National Leader of the All Progressive Congress APC, and former governor of Lagos State Alhaji Bola Ahmed Tinubu aka Jagaban has said that he and others will not abandon the APC, the party he helped to build.

Tinubu also said that the APC is for the betterment of the people and for is bigger and important than any individual.

'This government, APC, is for the betterment of the people & the national purpose is bigger and more important than any individual's desires