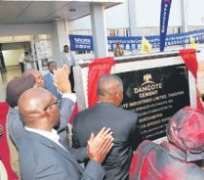 African multinational company Dangote Group has suspended operations in its  cement plant in Tanzania due to high energy costs, according to reports in  Tanzanian media.

Dangote Executives at Dangote Industries Tanzania denied the suspension of operations was due to energy costs, blaming rather  a technical glitch at the $500 million factory.

But Tanazaian Daily News  cites a government source, as saying that the cement manufacturer was complaining about the government's failure to provide the company with cheap fuel and other logistical solutions.

Dangote cement spends as much as $4 million on diesel every month powering its cement factory.

“Our plant uses six million liters of diesel per month to run generators after the promises to supply it with natural gas, which is produced in a nearby gas field, failed to materialize,” Dangote Tanzania CEO, Harpeet Duggal, had told a group of politicians in October. According to the newspaper, CEO of Dangote in Tanzania, Mr Harpreet Duggal, said the temporary stoppage was caused by a technical problem in the plant’s units, which is not critical.

“Dangote engineers are on the job and the plant should resume operations in the coming days,” Mr Duggal said. In recent days, a number of information circulated on social media saying the plant has close down due to high operation costs.

However, when asked about the high cost of production, the CEO said that compared to other Dangote operations, the running cost in Tanzania is very high. Mr Duggal said “one of the main reasons is our dependence on diesel generators for powering the plant.

“Also because of the location, far away from the main market of cement, the transportation cost is very high.”

Dangote said however they are upbeat about their long-term investments in the country and are confident, in collaboration with the government they would be able to get the costs in control.

The cement plant in Mtwara is the largest cement investment in East Africa. It has a capacity to produce 3.0 million tons of cement a year.

The location of the plant in the southeastern region of the country was meant  to take advantage of cheap natural gas that is extracted in nearby fields.

While the previous government led by former President Jakaya Kikwete had promised Dangote cheaper prices for natural gas, the TPDC under the government of President John Magufuli has refused to honor the agreement.

A report posted by Forbes indicated that  Dangote Industries had resorted to importing coal from South Africa, which is cheaper than natural gas – a move that has greatly upset top government officials in the Magufuli-led government, primarily because Tanzania also possesses substantial deposits of coal. In August, the government banned the importation of coal from South Africa – a move that pundits believe was specifically targeted at Dangote. The Tanzanian government has repeatedly requested that the cement behemoth source its coal locally, but Dangote executives have complained that the coal, which is mined from Songwe region, hundreds of kilometers away from Mtwara, is of poor quality and unreasonably expensive.

However, the acting commissioner of minerals in the Ministry of Energy and minerals, John Shija, has defended Tanzania's coal as being better than imported coal both in terms of quality and price.