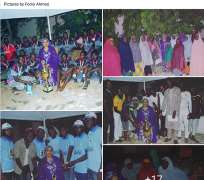 Acquainted with the noteworthiness of Sport activities, football especially in unifying people irrespective of religious, tribal or ethnic differences as well a major factor in building harmony, promoting peace and concretizing peaceful co-existence, the Niger State Commissioner of Commerce, Industry and Investment, Hajiya Ramatu Mohammed Yar'adua has been awarded for her continuous support in promoting sports activities in Edati Local Government Area of the State.

She was awarded at the 2016 final of Edati Local Government Football Council Chairman's Cup that was held at Day Secondary School Enagi on Saturday, 26th November, 2016 which saw Enagi FC thrashing their opponent to win the competition.

Presenting the award to Yar’adua, Comrade Yusuf Ahmed alias FRESH, Chairman Niger State Football Association, NFF executive member, Chairman Referee Committee and member CAF Technical and Development Committee lauded the Commissioner's role in sporting activities and noted with satisfaction that, the award is a well-deserving one while charging her to maintain the tempo.

The Commissioner explained that, the token donation is simply her modest strategy to make her community understand, adopt and apply the culture of supporting each other in whatever they are doing.

In her words 'If we must achieve our collective set goals of both human and community growth and development in Niger State and Nigeria at large, then we all need to be involved in whatever comes our way with a single voice". she stressed.

The local government area was filled with smiles as the commissioner's intervention to sporting activities was seen as astonishing and outstanding most especially in this hard times.

And that was how Enagi Stood Still for the amazing, all-ways smiling, humble, as you cannot help but agree with me, especially if you have met her one on one that, Hajiya Ramatu Mohammed Yar’adua's HUMILITY on her own has, is and will continue endearing her to not just her home country but anyone who met her.