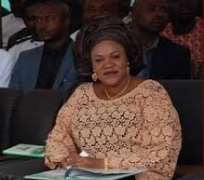 The wife of the Enugu State Governor, Mrs. Monica Ugochi Ugwuanyi, has been commended by widows and other vulnerable groups in Igbo-Eze North Local Government Area for her sustained commitment to charity.

The commendation came as Mrs Ugwuanyi, represented by Princess Francisca Ubosi, wife of the Enugu House of Assembly speaker, presented birthing kits and medical equipment to several beneficiaries at the council's headquarters, Ogurute.

Mrs. Ugwuanyi charged the beneficiaries to make good use of the items and sustain the fight against child-borne diseases, adding that more incentives to enhance their wellbeing and rapid development of the rural areas are still planned for distribution.

'The event is in continuation of the health project exercise flagged-off by the wife of the President, Mrs. Aisha Buhari and anchored by me to distribute birthing kits and other health facilities to vulnerable mothers, widows and the less privilege persons to alleviate their sufferings,' she noted.

Thanking the people for their support to the present administration in the state, Mrs. Ugwuanyi urged the women to always maintain a high sense of hygiene in their environment in order to ward off diseases.

Speaking, the host and the wife of the Transition Committee Chairman of Igbo-Eze North Local Government Area, Mrs. Cecilia Ezeja, thanked the wives of the President and the Enugu State governor for their health programmes which, she noted, would help reduce the spread of diseases.