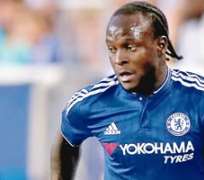 Victor Moses' impressive displays for Chelsea this season is set to land him a new and improved contract with Chelsea.

According to Sky Sports, Chelsea's plan comes amid reports that the Nigerian international had become a transfer target for Barcelona.

Moses, who was shunned by Mourinho and failed to impress on loan at Liverpool, had thrived as wing-back for Chelsea under Antonio Conte.

Having forced his way into the starting line-up for the London side, he has continued to impress and on Saturday he scored the winner for Chelsea against Tottenham.

With four goals in 14 appearances this season, the 25-year-old has played his part in lifting Chelsea to the top of the Premier League table.

In an article on Moses' performance this season, which was published on Chelsea's website, Conte was quoted as saying he was surprised the player had been overlooked for a long time.

'I noticed his potential from the first days of the summer retreat. Moses has important qualities: technique, physical strength, the ability to cover 70 metres of the pitch. I find it incredible that someone like him has been overlooked,' the coach said.

According to Sky Sports, Barcelona have sent a scout to a number of Chelsea games both home and away throughout this season and are impressed with his performance.