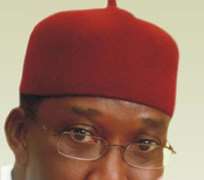 Political aspirants make too much of the people before election, and, if successful, too much of themselves after it. They use the people when they want to rise, as we treat a spirited horse when we want to mount him;--for a time we pat the animal upon the neck, and speak him softly; but once in the saddle, then come the whip and spur.

Christian Nestell Bovee
This may just be a memo or just another sincere piece of my mind to Delta State Governor, Ifeanyi Okowa who is fast building a name for himself as “Delta State is broke”, yet those around him live large like kings and queens.

Yesterday made it exactly one year that I had a private meeting with him in Delta State lodge, Lagos. Unfortunately all the things we discussed one year ago have not been fulfilled. It all turned out to be the usual promise and fail from a Nigerian politician, with penchant for lying.

I’m very certain that the result of the Ondo State election where the incumbent governor, Olusegun Mimiko of the Peoples Democratic Party (PDP) lost to the main opposition, the All Progressive Congress (APC) shocked Okowa to the bone marrows. As I type, I’m certain that he would be in the governor’s lodge trying to analyze where they went wrong, inspite of all the plans they made in Abuja. Mimiko is not your everyday governor who should lose an election, but the people have become wiser that you can’t use them and dump them. On the day of reckoning, they will pay back in your own coins, and they did just that to Mimiko by voting Rotimi Akeredolu.

In Delta State, the people have not fared better under Okowa, despite the huge support they gave him during the last elections, where they fought an incumbent governor just to see him succeed. Everyone who truly supported him are today regretting why they did so, as he has turned the government into a mini cabal, where only few call the shots and gives out crumbs to poor supporters.

Even those he appointed as Commissioners, Special Advisers and Special Assistants are wailing and wishing the government comes to an end, so they can support someone who has the interest of the state and their own welfare. Today, Tony Okowa has practically turned Elomax Hotel into his bedroom, where he wastes millions lodging, while his house in Okpanam Road is left to rot away. His brother is the governor and he’s the Sports Commission boss with so much money to throw around, yet no single success has he recorded in sports since he came onboard, unlike Pinnick Amaju who turned the commission to a budding sports centre.

Who is deceiving Okowa that he’s making life prosperous for Deltans when he has impoverished them and made life worse for them. it is obvious that a cabal has hijacked the government that he and his Principal Secretary are not aware of. It is crystal clear that he may not be fully in control of the government but relies on what his childhood friend who is now a big contractor and consultant in the state tells him. Like someone once asked. “Is Lawrence Oshiegbu the governor”?

Who will believe the slogan of “Delta State is broke”, when we now have civilian billionaires in his government? Okowa should tell Deltans who the Okpuzor families from Ika are? They are unarguably the richest Deltans at the moment. My days of private investigations on them reveal dangerous details that will shock the state if reported?

The governor cannot keep pretending like all is well when everything we all struggled together to achieve is falling apart right before our eyes, and the opposition fast gaining ground. Of what use is giving Uche Okpunor another N2 billion this month for Airport project that does not benefits the common man? Where are all the numerous investors that he held meetings with amidst fanfare and signed MOUs with when he came on board in 2015? Why has the budget for DESOPADEC not been released for the commission to begin work with? Why are people from Delta Central and South crying and those from Ika dancing Skelewu because of the numerous contracts they now get? Is this a government of nepotism and tribalism?

Ondo State victory for the APC should serve as a lesson to Okowa that you cannot continue to take the people for a ride and appeal to them few months to your elections to vote for you. The slogan of “PDP all the way” worked last elections because we saw in him a fresh idea and had to vote people that could work with him. Thankfully enough, we have seen his kind of person and can now judge better.

With the current disenchantment against him and his Ika government, he may just be gunning for one term in office. The emperor in Abuja has already given a mandate to his top strikers from South South to capture Rivers or Delta and the easiest of them is Delta. Rivers State is too violent a state to toy with. Nyesom Wike as a governor is doing extremely well and has cleared all pension arrears in the State, while Okowa is not only owing workers but also pensioners like his failed Ondo State counterpart.

Karma is a dangerous bitch that can never forget the wrongs done. The days of reckoning will soon be close and Okowa will realize that he cannot get the votes of Delta Central through his SSG, Festus Agas or his Commissioner for Environment, John Nani alone but will need the combination of those he has abandoned.

Like one of his top aides said recently “Na only who you follow chop, you dey follow drown”. As it stands, Okowa is cruising alone with sycophants hailing him on. His Commissioner for Economic Planning, Kingsley Emu believes that all is well and that the governor has blocked the loopholes through which funds are siphoned. Whenever he tells me that, I just nod, knowing that he’s not a politician but a technocrat that does not know what goes on in the system and doesn’t feels the anger on the street.

Those who truly supported him in 2014 are already taking a walk out of his government to join hands with the progressives and he doesn’t seem to know. The belief that Nigerians are angry with President Muhammadu Buhari should not mean that if Deltans are given a credible candidate from APC who has not tasted the seed of corruption, they won’t vote for such a person.

As a governor, he’s extremely nice and dedicated to work. He has the heart of gold to deliver prosperity to Deltans. He has the desire to truly make Delta the hub of industrialization and a commercial city of repute, but unfortunately swallowed by unseen hands that manipulate him.