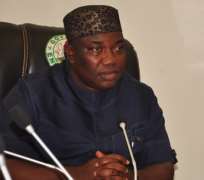 Governor Ifeanyi Ugwuanyi of Enugu State yesterday directed the 17 Council Chairmen in the state to ensure that they pay the full salaries of their workers before Christmas in line with the premium his administration places on the welfare of public servants in the state.

Speaking at the inauguration of the United Enugu Women for Gburugburu, a socio-political organization aimed at promoting good governance in Enugu State, Gov. Ugwuanyi said that the achievements his administration had recorded so far was by providence and prudent management of the state's lean resources.

The governor thanked the women of the state for their supportive role and continuous prayers for the success of the administration, describing them as 'pathfinders' in the quest for good governance in the state.

'In Enugu State, God is in charge of the affairs of the state. I'm just a mere instrument in the hands of God for the development of the state and that's why in all we do, we acknowledge the God of Abraham, God of Isaac, God of Jacob and the awesome God of David,' Ugwuanyi said.

Gov. Ugwuanyi who declared that the Peoples Democratic Party (PDP) in the state is 'one indivisible family', equally thanked all the members of the party for their 'unprecedented support' to his administration.

Earlier in her address, the State Co-ordinator of the organization, Hon. Nnenna Josephine Nwokedike, disclosed that the body was established to 'create political consciousness among the women of the state for their active involvement in the scheme of things'.

The state's Deputy Governor, Mrs. Cecilia Ezeilo, commended Ugwuanyi for his immense respect and commitment towards the progress of Enugu women, describing him as a 'God-sent, visionary, humble and women-friendly governor'.