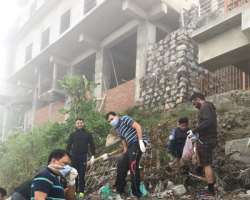 While a section of people in the society across the globe remains critical about the alternate media users as being selfish, irresponsible and troublemakers, here is a group of youths who have used their communication skills for a better cause.

The group of individuals from different walks of life joined hands for cleaning the Sukleswar Ghat on 23 November and that way inspired other Guwahatians. Nearly 20 young professionals assembled on the southern bank of mighty Brahmaputra in the early hours of Wednesday and involved in cleanliness drive at the river bank.

“We came under an initiative of Prachesta (meaning endeavour) to clean the Sukleswar Ghat with individual capacity. Besides joining hands in the cleanliness drive, we have donated a dustbin and few placards asking people not to spit and dump garbage in the Sukleswar (also known as Sukreswar) temple premises,” said Ujjal Saikia, one of the participants.

Inspired by Varanasi cleanliness icon Temsutula Imsong’s call for volunteering labour (Shramdaan) for the benefit of the society, Saikia along with Nirangkus Das, Tarsem Sony Singh, Aditya Jain, Anupam Bordoloi etc decided to clean up the northern part of the Shiv temple in the heart of the city.

“The primary idea behind this initiative is to promote a cleaner India and also to encourage everyone to keep his/her surrounding clean. We believe, the Swaach Bharat mission cannot be successful unless the people join hands in the endeavour,” asserted Saikia adding that they were using the social media space for sharing ideas, organizing events and also carrying out follow-up actions.