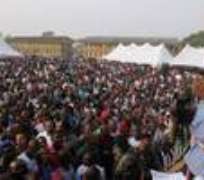 The Nation reports that there was drama Monday as a victim’s brother identified one of the people that allegedly buried his brother alive. There was a stirring in the House of Representatives committee on Army in its investigative hearing on the killings of unarmed civilians in the South East, when Mr. Eric Koryene identified one of the supposed killers of his brother and pointed at a man sitting in the hall, saying the man was present when his brother was buried alive.

According to him, his brother, Pabby Koryene, an APC Chieftain was buried alive for political reasons by a notorious Solomon Ndigbara’s gang and the man was part of those that did it.

The Hon. Rilmamnde Shawulu headed Committee said the name of the man should be collected for further investigations.

Another man in the hall who was threatening the man who was identifying the alleged culprit was reprimanded by the committee.

The accused man, Thomas Nwafor, who said he is from Ebonyi state and does fast food business was put under oath by the committee.

But he denied the allegation that he was at the scene of the crime, and that he assisted in burying Kayinee alive.

At the committee hearing, there were confusing reports, claims and counterclaims by the different stakeholders leading the committee with a string of mysteries in deciding if it was the police, military, militants, cultists of political hatchet men that were responsible for the killings in Ogoni.

Col. O. N. Taiwo spoke on behalf of the Army saying the matter is still being investigated.

The Inspector General,of Police, Ibrahim Idris, represented by Commissioner of Police, Rivers State Command, Francis Odesanya said the military were on patrol and they were ambushed by cultists/militants.

He said two people were charged to court from the group that attacked the Army, adding that they moved straight to the APC secretariat and set the place on fire.

According to him, the two were identified by people who said they were part of the group that caused the mayhem.

The Civil Liberties Organisation in its report to the committee on the invasion of Yeghe and other Ogoni Communities by the Nigerian Military operatives said:

” February 22 and 23, 2016 were days of blood, fire and bullets in Ogoni land, one of the major ethnic nationalities that make up Rivers State. On that fateful day, soldiers, dressed in full military regalia and armed with sophisticated weapons, stormed some Ogoni Communities in a manner that made many to wonder if war had been declared on Ogoni.

The submission. Signed by the Zonal Chairman, Chinedu Uchegbu and the Livingstone Wechie Deputy Director, Relations/ Communications demanded further investigation and prosecution of the officers involved in the killings, “including Magnus Abe and Bari Mpigi.”

But in a twist, the Ogoni Generation Next Project in a submission signed by its facilitator Comrade Kadilo Kabari and Secretary Kenedy Friday said they ” have dispassionately looked at the issues raised by the CLO South- South Nigeria to the Committee and have come to the irresistible conclusion that the petition is laden with distortions to deliberately mislead the Honorable House.

Cauline Nagbo, a former desk officer of MOSOP, President Ogoni women forum, while speaking also faulted the CLO petition saying it was a plot to get the military out of the region so that mayhem can reign.

According to her, the military is needed in the region in order to safeguard the lives and property

The Nigerian Security and Civil Defence Corps in their presentation made by Obiekwe Augustine said ” report from our officers in Rivers State shows that prior to the 19th March 2016 rerun election in Rivers States there were tensions and apprehensions in Ogoni land based in the information that one Mr. Solomon Degbara, a suspected a militant, had in his possession a large cache of arms and ammunitions for the election.

“The intelligence was shared by the relevant agencies and the security outfits that had the direct mandate commenced operation. Our report shows that the Civil Liberties Organisation saw it as invasion of Ogoni land and went to court.”

The Chairman of the committee expressed dissatisfaction with the disparities in the submissions of the Army and the Police especially in terms of cause of the shooting and the number of casualties as well as other glaring inconsistencies.

He read out a letter purportedly written by Senator a Magnus Abe in which he chided the Speaker, Yakubu Dogara for allowing the investigation.

According to Shawulu, the Senator in the letter said the Speaker as an APC member should not have allowed the investigative hearing.

Shawulu further said: “We are not interested in issues of Party. The author could be in another party in the next one year. We’re interested in Ogoni and the integrity of the Nigerian Army.

“The principal allegation is against the army. And what we want to establish is if the MDA we are over sighting has done anything wrong.

“We want to see in understanding what has happened if we could make adjustments, especially in the Nigerian Army.”