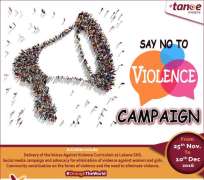 GirlEmpowered joins the campaign by running the “Say No To Violence” campaign. This campaign features several activities undertaken by GirlEmpowered on social media and in communities and schools which aim to convey anti-violence messages.

To commemorate this day, GirlEmpowered is delivering the Voices Against Violence curriculum at Labone Senior High School.

The campaign will continue with social media advocacy and messages on the need to end violence or sustain the peace and its impact on the girl child especially as the Election Day draws near. Other activities include community sensitisation on the elimination of violence and human rights.

In a statement issued by the National Coordinator of GirlEmpowered; Marian Darlington, she states the need for stakeholders to join the campaign to “Say No to Violence”.

She stated that violence of any form must not be overlooked or brushed aside as the “little” signs are what usually develop and go out of hand.

She further stated that violence against women and girls is not just a female concern but a national concern and must be addressed in a nation that seeks to promote national peace.

Marian Darlington was recently appointed by The African Network of Entrepreneurs (TANOE) as the National Coordinator of its non-profit flagship project GirlEmpowered, which promotes sustained empowerment and skills development of teenage girls.