To Send Students Home In The Name Of Strike Action Would Dispose Them To All Forms Of Anti-social Practices – Dr. Abdulrahman 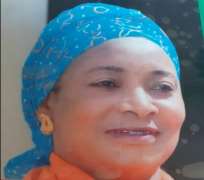 The immediate Past President of All Nigeria Confederation Of Principals Of Secondary Schools (ANCOPSS), Dr. Fatima Abdulrahman has called on the Academic Staff Union of Universities (ASUU), to consider the plight of students and shelve their industrial action.

In a press release issued on Tuesday in Abuja, Dr. Abdulrahman said that it is obvious that times are hard owing to the general economic down turn in the country.

“To send students home in the name of strike action would not only worsen the harsh social and economic conditions of Nigerian students, but above all dispose to all forms of anti-social practices, including crimes and other deviant behavours.

I therefore plead with ASUU to call off the industrial action while it sits in further dialogue with the Federal Government,” Abdulrahman

“Lecturers in higher institutions of learning should partake in periodic open fora, during which students could freely comment on their conduct, with a view to isolating the bad eggs that promote and perpetrate anti-social practices, including sexual harassment, sorting and absenteeism; the necessity of decentralizing the National University Commission, (NUC) so that institutions could be free to pursue excellence in line with International Standards and Global best practices, Dr. Abdulrahman said.