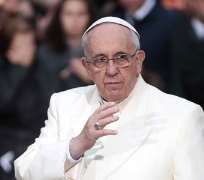 Often faulted as not clear when it comes to the Church's negative judgment on abortion, Pope Francis on Sunday couldn't have been more firm in calling it a 'very grave sin' and a 'horrendous crime.'

'I was thinking on the attitude of sending the kids back before they're born, this horrendous crime, they send them back because it's better like that, because it's more comfortable, it's a great responsibility- a very grave sin,' Francis said.

The comments came in an interview with the Italian Catholic media outlets TV2000 and Blu Radio, released on Sunday after the closing of the Jubilee Year of Mercy.

His words came as he was remembering two moments of the Holy Year which he found to be particularly memorable, asked specifically about the 12 'Fridays of Mercy.'

In the hospital, Francis was especially touched by the crying of an inconsolable mother, who'd been pregnant with triplets. One of the babies, however, didn't survive.

'There was this woman who cried, cried, cried in front of her twins… very small, but very beautiful: the third had died,' the pope said, visibly moved by the recollection. 'She cried for her dead son, while she caressed the other two. The gift of life.'

It was in this moment, he continued, that he thought about the attitude of 'sending the kids back.'

The pope visited the newborn ward of the Roman hospital San Giovani on Friday, September 16.

When meeting the women rescued from human trafficking, Francis said he was particularly moved by the story of a 'really beautiful' African woman who'd been abused, forced to work, even as a prostitute, and who'd delivered her baby, alone, in the street.

The newborn didn't survive.
'They forced her to work even that day…' the pope said, adding that she'd not only been prostituted, but also heavily beaten with wooden sticks.

'And I thought about the men who paid the girls: Don't they know that with that money, to have some sexual satisfaction, they helped the exploiters?' Francis said.

The fight against human trafficking and modern day slavery are issues with which the Argentine pontiff has long been involved. Agency report.