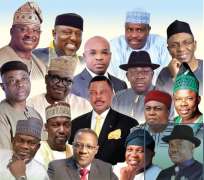 The Federation Account allocations to the 36 states in the country have fallen by an average of N2bn per state every month, following the crash in global oil prices and the consequent economic challenges, the Governor, Central Bank of Nigeria (CBN), Mr. Godwin Emefiele, has said.

This made the 36 states to record N864bn fall in federal allocations in the last one year.

Emefiele stated this in his keynote address at the 2016 Annual Bankers Night organised by the Chartered Institute of Bankers of Nigeria in Lagos on Friday.

He said Nigeria was facing 'a classical case of economic stagflation' occasioned by external shocks.

In his speech entitled, 'Policy options for reversing Nigeria's economic downturn', the CBN governor said the global crash in oil prices had also made foreign exchange inflows into the CBN to drop by an average of $2.3bn in the past 26 months.

He said, 'In reality, Nigeria's economy is currently facing a classical case of 'stagflation'. This situation largely occurs when a country's Gross Domestic Product is falling or stagnant, while unemployment and inflation are rising, all simultaneously.

'Given the sharp drop in oil prices, Federation Account allocations to states have dropped by an average of about N2bn monthly per state, which partly explains their inability to meet some basic recurrent expenditures, including payment of workers' salaries.

'Similarly, average inflows of foreign exchange into the CBN have fallen by over $2.3bn every month over the last 26 months.'

Emefiele, who said the country could have been better prepared for the challenges, said lack of right policies and proper capital controls threw the country into economic crisis.

In response to recent calls for the CBN to reduce the high lending rates, he said, 'The CBN would be abjectly failing on one of its cardinal objectives if it cuts interest rates at this time, he added.