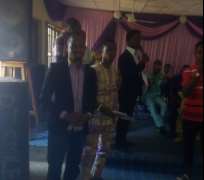 .
ADEWUMI made this announcement after reading his inaugural speech at the swearing-in ceremony which held at Com Suyi Aribisala hall, Ekiti-NLC secretariat, Ado Ekiti on 17th of November, 2016.

.
He also announced the immediate dissolution of all union committees, noting that they have offered the best they could "the RECONFIGURATION TEAM led by Com Obayemi Peter Seun has done their best and they have just handed over to us, so by the power vested on me, I want to announce the immediate dissolution of all existing committees of the union"- he said.