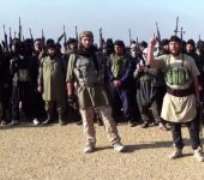 Joe Stork, Deputy Middle East Director at HRW, said in a statement on Thursday in Cairo that the bodies in the grave appeared to be of men killed in custody.

He cited witnesses as saying they believe that at the end of October, Islamic State massacred several hundred former policemen they had been holding as prisoners.

“Islamic State should be held accountable for these crimes against humanity.

The Iraqi army had earlier said that the same mass grave, discovered on Nov. 7, contained about 100 decapitated bodies thrown into a rubbish pit.

Iraqi investigators were probing a mass grave discovered by troops advancing on the Islamic State-held city of Mosul, where soldiers have captured a sliver of land but later halted their advance.

It appeared to be the latest of several mass graves found in territory retaken from IS, which massacred hundreds of people as it swept across northern and central Iraq in 2014 and is believed to have waged a brutal crackdown since the start of the Mosul offensive. (dpa/NAN)