Obama's approval rating continues on uptick in the aftermeath of election 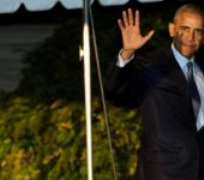 President Obama's approval rating is higher than any point in his second term. Expectations for Donald Trump's presidency are mixed. And it shouldn't come as a surprise that white women voted Republican. This is HuffPollster for Tuesday, November 15, 2016.

OBAMA'S APPROVAL RATING AT HIGHEST POINT SINCE 2009 – President Barack Obama's approval rating, which rose steadily throughout the 2016 campaign after spending much of his second term in the red, is continuing to tick up in the election's aftermath, new polling shows. According to Gallup's most recent measure, Obama's approval is at 57 percent, with only 40 percent disapproving. The most recent Politico/Morning Consult poll has his approval at 50 percent, with 46 percent disapproving. Both polls were completed after last Tuesday's election.Obama is averaging 52.5 percent approval in the HuffPost Pollster chart, his highest approval rating since August of 2009. Gallup's historical data show that it's not unusual for outgoing presidents to get a bump in their ratings: Ronald Reagan and Bill Clinton both experienced ratings bumps in their final year in office. Even George H.W. Bush, who was defeated in November of 1992, saw his approval ratings rise to over 50 percent in the final months of his presidency. The one recent exception is George W. Bush, whose approval stayed well below 40 percent despite a small final ratings bump in late 2008. [ Gallup ,

AMERICANS HAVE MIXED EXPECTATIONS FOR TRUMP'S PRESIDENCY – Gary J. Gates: “Six in 10 Americans say President-elect Donald Trump's administration will be able to reduce unemployment and create new jobs (62%) and improve the economy (60%). On the other hand, about one in three believe he will improve race relations (35%) and improve the environment (35%), and 38% think he will keep the nation out of war….After presidential elections, Americans are typically positive about the prospect of an improved economy ― and this year is no different, with large majorities expressing optimism about the economy and job growth….The 39% who expect Trump to be able to heal political divisions is similar to the 41% recorded in 2001 after George W. Bush's election, but lower than the 54% who believed this of Obama in 2008, before his first term…. The 38% of Americans who think the Trump administration can avoid war is sharply lower than the 70% and 60%, respectively, who thought George H.W. Bush and Bill Clinton would keep the nation out of war….Few Americans think Trump can avoid war. This suggests that despite Trump's election victory, the skepticism his critics created during the campaign remains.” [ Gallup ]

WHITE WOMEN ARE VOTING REPUBLICAN CONSISTENTLY – Jane Junn: “In the wake of Donald Trump's election as President of the United States, one piece of data from voter exit polls has been particularly surprising for Clinton supporters: 53% of white women voted for Trump compared with 43% for Hillary Clinton…. Defined as the difference between the proportion of women (55%) and men (45%) supporting the Democratic candidate, the gender gap was 10 percentage points in 2012, demonstrating yet again that American women supported the Democratic Party candidate. All the same, and as Cassidy noted in 2012, exit poll data revealed that 56% of white women voted for Romney compared with only 42% for Obama, a +14 percentage point margin for the Republican Party candidate among white females…. [W]hite women also supported the Republican Party nominee in 2008 by a margin of +7 percentage points, when 53% of white women voted for McCain and 46% supported Obama…. In how many presidential elections between 1952 and 2012 have white women supported Democrats more than Republicans? The answer is two. We can now extend the time series to 2016, and the number of times white women voted more for Democratic candidates over Republicans remains two.” [ Politics of Color ]

IN SOME MAJOR AFRICAN NATIONS, CITIZENS ARE CONCERNED, BUT HOPEFUL – Richard Wike, Katie Simmons, Margaret Vice and Caldwell Bishop: “In South Africa and Nigeria – sub-Saharan Africa's two largest economies – economic sentiments have turned sharply negative since 2015. Around seven-in-ten South Africans and Nigerians now say their economies are in bad shape. Meanwhile, in the East African economic hub of Kenya, just over half say the same. Large majorities in all three countries consider the lack of employment opportunities a very big problem. Moreover, as a new Pew Research Center survey of these three major African nations illustrates, many believe the political and economic system is stacked against them. Political corruption – seen by many experts as a key stumbling block to a country's development – is a major public concern. Broad majorities in all three countries name government corruption as a very big problem…. Despite these concerns, there is considerable optimism about the future across the three nations surveyed…. [E]ven though their views about the current state of the economy are negative, most are upbeat about the short-term economic future: Majorities in Nigeria, South Africa and Kenya believe their countries' economies will improve in the next 12 months. Moreover, roughly three-in-four Nigerians, Kenyans and South Africans believe that young people today who want to live a good life should stay in their countries rather than move abroad.” [ Pew Global ]