Printing of Fake INEC Result Sheets: We don’t know what to believe anymore 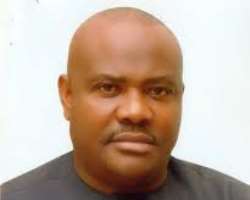 Rivers State is in the news once more; the airwaves are again inundated with yet another political theatrics. Governor Wike says that some persons were caught printing fake INEC result sheets for the rescheduled December 10th national and state legislative rerun elections. The “culprits” were apprehended and taken to the Rivers State Government House for interrogation where they “confessed” that they are working for the Rivers State chapter of the All Progressives Congress (APC). The AIT was there for the “scoop” and the state chairman of PDP, Felix Obuah was at hand to narrate the incident in a most dramatic manner.

This latest uproar is coming on the heels of a similar melodrama that occurred on Saturday, October 8, 2016. On that day, Rivers State woke up into the scandal that Governor Wike had in the wee hours of the morning stopped the arrest of a High Court Judge by operatives of the Department of State Security (DSS). What again? What was Governor Wike doing obstructing the arrest of a judge and why in such unholy hour?

On that occasion, the Governor assembled the media in his characteristic manner and shouted to high heavens that his attention was called by passers bye around 2am, to an attempt to abduct a serving Judge to an unknown destination. He said that as the Chief Security Officer of Rivers State, he rushed to the scene to prevent the illegal arrest at such an unholy hour.

But when the dust settled, information emerged that on that night, the DSS had carried out sting operations across the country to, as it were, catch some suspected corrupt Judges with all the incriminating evidences intact. The DSS discovered hundreds of millions of money in local and foreign currencies in the homes of over six judges during the operation but in Rivers State, the thugs that accompanied Governor Wike smuggled $2m out of the scene and frustrated the operation.

It turned out that the entire hullabaloo and the media theatrics were a huge cover-up by the Governor to divert attention from his ignoble role in corrupting the nation’s judiciary. It became glaring that the Governor’s obstruction of the DSS operation was a “Desperate Survival Mission” to remove from the home of the said Judge, the evidence of what was later revealed as two million dollars.

Unfortunately, that unlawful action of preventing the DSS from effecting arrest that was committed by Governor Wike, Felix Obuah and some other PDP stalwarts has been swept under the carpet. Nobody is calling for the arrest and prosecution of the thugs that accompanied Governor Wike to carry out that criminal act. Even the Inspector General of Police (IGP) has not told Nigerians what disciplinary action he has taken against the policemen who aided Wike to stop the DSS.

On the current uproar about alleged illegal printing of INEC result sheets, the Rivers State Government and the PDP released a video showing bags purported to contain fake INEC papers and a “confessional statement” by one Mr. Atonyesia Peterside claiming that he was commissioned by an APC stalwart to print the INEC result sheets.

The story has it that on Saturday, November 5, 2016, Mr. Atonyesia Peterside and Mr. Naneh Godday were arrested by men from the Rivers State Government House in connection with the printing of fake INEC election materials. The men were “arrested” in a printing press in Port Harcourt and whisked to the Rivers State Government House for interrogation.

However, Mr Atonyesia Peterside speaking from his cell said that on that faithful day, his office was invaded by people who abducted him to Rivers State Government House, accused him of printing fake INEC papers, beat him up and compelled him to make statements under duress. His lawyers had since written a complaint to the Assistant Inspector General of Police (AIG) in Calabar about the interference of the Rivers State Government with investigations on the matter.

Characteristically, Governor Wike and the Rivers PDP have been shouting themselves hoarse that INEC is collaborating with APC and the Police to rig the forthcoming rerun elections. They say the Police are destroying the evidence collected from the printing press and that the Rivers State Chapter of the APC has conspired to transfer the “culprits” from the Rivers State Police Command to Zone 6 in Calabar in order to frustrate proper investigation.

For a Governor who has perfected the act of heightening political tension, raising false alarm and creating fear in the populace, the question on the lips of rational people is: What is behind the latest allegation of illegal printing of INEC result sheets? What is Governor Wike up to this time around?

Barrister Nyesom Wike has raised several alarms in the past that have all turned out to be smokescreens for hidden selfish machinations. These scheming and treacherous activities have created credibility problems for the governor and also created doubts in the minds of decent people about the real motive behind this latest allegation.

One of such previous manoeuvres by Nyesom Wike was the deliberate misleading of the High Court of the Federal Capital Territory to declare Felix Obuah as the winner of the Rivers PDP chairmanship seat for which Obuah was never a candidate. Wike and his fellow collaborators deceitfully dispossessed Chief G.U. Ake (until his death) of his legitimate office as Chairman of the State PDP and by that act impose Wike as governorship candidate of the PDP and Governor of Rivers State. This is one heinous act that has made it extremely difficult for rational minds to believe anything the governor and his party say. It is the reason the Wike government is called a “Rogue Regime”.

Another ignoble act that impugns Wike’s reputation and makes it increasingly difficult to believe anything he says, was the make-believe fight he staged in support of former President Goodluck Jonathan, whereas the real motive was Wike’s aspiration to thwart the rotation of the governorship position to other deserving ethnic groups in Rivers State. He has achieved his selfish ambition but he is faced with the difficult task of gaining acceptability among right-thinking people.

The current noise over the printing of fake INEC result sheets is seen by observers as a ploy by Wike and the PDP to prepare the public to accept the outcome of a rigged rerun election. It is seen as a deliberate reinforcement of the propaganda that only the PDP can win free and fair elections in Rivers State (the APC can only win through fake result sheets) whereas armed militants and cultists would be drafted to execute the December 10th rerun elections for the PDP.

For a governor who has repeatedly maintained that the 2015 elections in Rivers State were free and fair despite the massive bloodshed and voters intimidation by gun wielding militants and cultists, it is not out of place to take whatever he says with a pinch of salt.

Wike says that Rivers State is the safest place in Nigeria in spite of the daily kidnappings, rampant cult activities, armed robberies and gruesome political killings. The governor says that he does not owe salaries, yet thousands of workers including teachers are crying over several months of unpaid salaries. How do you then blame people for refusing to believe Wike anymore? What is the guarantee that the latest allegation from the Wike’s camp about the printing of fake INEC result sheets is not another baseless, unsubstantiated and preposterous allegation?

Rivers people do not know what to believe anymore. Why has Governor Wike become so restless and desperate to investigate, try, and jail the alleged printers of fake INEC documents by himself? Why has the Governor and the PDP become the complainant, prosecutor and judge? Why can’t Wike and the Rivers PDP allow the Police do its work? These are questions begging for answers as we watch the latest circus in Nyesom Wike’s Rivers State where crazy things have become acceptable as normal.

Disclaimer: "The views/contents expressed in this article are the sole responsibility of the author(s) and do not necessarily reflect those of The Nigerian Voice. The Nigerian Voice will not be responsible or liable for any inaccurate or incorrect statements contained in this article."
Articles by Ibim Semenitari
17-3-2017  Amaechi’s 8 Years A Waste? An Insider’s Assessment Of The Rivers Security Situation Under Amaechi An28-8-2011  The Masked Dance Of Anyaekwee Nsirimovu