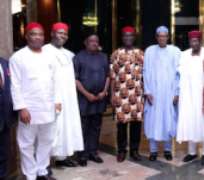 INDICATIONS have emerged that South East Senators, who recently visited President Muhammadu Buhari presented a list of demands as a condition for supporting the $29.9 billion external loan being sought by the President through the National Assembly, NASS.

The proposals, which Saturday Vanguard had knowledge of focused on poor state of infrastructure in the South East geopolitical zone, security and accommodation of the zone's interest in the proposed loan, detention of leader of Independent People of Biafra, IPOB, Mr. Nnamdi Kanu and construction of a rail Standard Gauge Spur from Agbor to Onitsha.

Others included a request to address the issues of kidnapping, herdsmen and IPOB, the establishment of a dry port in Abia State, Onitsha and Enugu, request for a place in the National Security Council, the inclusion of South East when concessioning federal roads and airports and construction of extra River Basin Development Authority for the zone. A breakdown showed that the lawmakers demanded a better funding of federal projects and institutions in the region, arguing that less than 10 percent of appropriated funds were released annually in last past 10 years.

They also observed that the Enugu Airpot runway had a wrong design and was dilapidated for an airport of its status. Hence, they demanded the President should prevail on the Minister of Transport to commence rehabilitation of the facility. While making a case for sustainable communication with South East leaders, the legislators requested that a private member bill presently at NASS be signed by the President if passed.

Beyond these, it was learnt that the legislators of South East extraction were irked by the belief that the zone was left out among beneficiaries of the proposed external loan. It was particularly against this backdrop, that they visited the President with the list of demands expected to be met in order to bring about equity. The delegation which was led by Deputy Senate President, Sen Ike Ekweremadu and Sen Eyinnaya Abaribe had said that the marginalisation of the South East largely informed their visit.

Ekweremadu, who spoke to State House Correspondents at the end of the meeting, said: “For us from the South East, we believe that dialogue is better than any other form of engagement. So we decided to visit the President and present to him some of the concerns of the South East including the issues of roads and infrastructure. “We also discussed the issue of security with him and of course the issue of IPOB. We had a good conversation and he promised to look into the issues.

This is the South East caucus in the Senate and we came to see the President because of the issues we have in the South East. “We had a fruitful discussion with the President. He has promised us that he is going to look into the problems of South East. We know that there are problems everywhere but we also believe that the South East is the zone that is far much short-changed at this time than other zones.

“We also talked about the issue of appointments from the South East, especially with respect to the National Security Council. The President also told us that governors of the South East have also engaged him on the same problems. We were reassured by the response we got from the President and we look forward to further interaction with him in this manner.”