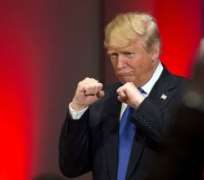 Dozens of celebrities including Lady Gaga , Rosie Perez, Amanda Seyfried and Marg Helgenberger and Pink have added their names to a long-shot movement underway to legally deny Donald Trump the presidency. Three days after the election, they and more than 2.7 million Americans have signed a Change.org petition calling on Republican electors to switch their votes and make Hillary Clinton president.

Although it's allowed under the Constitution, the “Hail Mary” effort has little to no chance of succeeding because actually turning the votes of electors probably is more firmly rooted in fantasy. Still, the effort to keep Trump out of the White House is more evidence of the growing dissatisfaction with the election's outcome. And though

The former Apprentice star  won the majority of electors , even though Clinton appears to have won the popular vote, but his election won't be official until December 19, when the Electoral College meets in each of the 50 states and Washington, D.C., to cast their votes for president and vice president.

Votes still are being counted, but the electoral map suggests that Trump will finish with 306 electors to Clinton's 232. But that margin of victory could be erased, and the election handed to Clinton, if 38 of those 306 Republican electors switch their votes. And prior to the election, several of them indicated that they just might do so if Trump won.

And it doesn't matter that Clinton has conceded or that President Obama already has met in the White House to congratulate President-elect Trump. The electors still will meet in state capitals all across the country in five weeks to confirm, or overturn, the voters' decision. And if 38 Republican electors change their votes, Clinton would be president-elect.

“On December 19, the electors of the Electoral College will cast their ballots,”

the petition states. “If they all vote the way their states voted, Donald Trump will win. However, they can vote for Hillary Clinton if they choose. We are calling on the electors to ignore their states' votes and cast their ballots for Secretary Clinton.”

Long derided as an archaic and undemocratic 18th century throwback, the Electoral College was designed for an election just such as this: a last-chance check-and-balance to undo a vote in which the people might have made elected a popular but unqualified demagogue who threatened to lock up his political opponent.

Unlike Brexit, where the British people weren't given a second chance to reconsider what they'd done, the Electoral College was designed by the Founding Fathers as a last chance do-over —  a second election to make sure the first one wasn't a gigantic mistake.

The role of the Electoral College was established in Article II, Section 1, of the U.S. Constitution, which states: “Each state shall appoint, in such manner as the Legislature thereof may direct, a number of electors, equal to the whole number of Senators and Representatives to which the State may be entitled in the Congress: but no Senator or Representative, or person holding an office of trust or profit under the United States, shall be appointed an elector.”

The Founders' intention was that the Electoral College would serve as a second election, just as valid as the first. As Alexander Hamilton wrote in the Federalist Papers: “It was equally desirable that the immediate election should be made by men most capable of analyzing the qualities adapted to the station, and acting under circumstances favorable to deliberation, and to a judicious combination of all the reasons and inducements which were proper to govern their choice. A small number of persons, selected by their fellow-citizens from the general mass, will be most likely to possess the information and discernment requisite to such complicated investigations.”

That “complicated investigation” is now in the hands of the 306 Republican electors, who must decide during the next five weeks whether they really want Trump as Commander in Chief with access to the nuclear codes.

All of the electors were selected long before the election, chosen at state conventions or through votes of the parties' central committees. They're all regular folks – nurses and lawyers, real estate agents and teachers – and it's in their hands that the fate of the country now rests.

There is no federal law that requires electors to cast their votes for their pledged candidate, and 29 states have no laws compelling them to do so. Seventeen of those states that went for Trump, including Texas, Arizona, Missouri and Indiana, have a total of 172 Republican electors. Twelve other states that Trump won – including Florida and Ohio – have laws against what are called “faithless electors,” but no elector has ever been prosecuted for failing to vote as pledged, and it's happened 67 times since 1796.