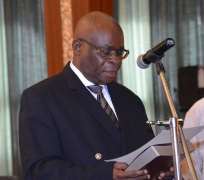 The development found relevance in Section 230 subsection (iv) and Section 231 subsection (I) of the 1999 Constitution of Nigeria.

Onnoghen would take over from Justice Mahmud Mohammed, who has just proceeded on retirement leave, though his appointment would have to be confirmed by the Senate.

Performing the ritual at the Council Chamber of State House, yesterday, President Buhari sought the cooperation of the judiciary in the fight against corruption and insecurity as a way of boosting the economy.

He said: 'I congratulate the new acting CJN to have come in this trying time in the life of our nation. Trying time in the sense of the three identifiable problems this country is facing - physical security, the problem of economy and corruption.

'In this room contains the constitutional bodies that are responsible for bringing Nigeria back into line in terms of security and managing it efficiently, while making sure that the economy is resuscitated and that security of doing business at all stages in the country is free and fair.'

The President, while congratulating the former CJN for the time spent in office, also wished him well in other personal future endeavours.

Speaking on the occasion, the new CJN, Walter Onnoghen, expressed gratitude to God for his new position. Promising to assist in the fight against corruption, he said:  'In this state of our development and with your programme in tow, I assure you of the full cooperation of the third arm of government in the continuation of the war against corruption and misconduct in the judiciary.

'I intend to carry on where my predecessors stopped, modify certain areas but with the general ultimate goal of having a better judiciary befitting the nation, Nigeria. Thank you for the confidence reposed in me and by the grace of God, we shall succeed'.

Also speaking with State House correspondents at the end of the ceremony, the immediate past Chief Justice of Nigeria, Justice Mahmud Mohammed, who agreed that there was strong presence of corruption in almost all facets of the polity, solicited the cooperation of Nigerians to fish out corrupt elements.

'We agree corruption is everywhere. But you see, we are all Nigerians but in the judiciary, it is there we need the assistance of all Nigerians to help fish out those corrupt elements within us so that we could fight with vigour to deliver a clean judiciary for the nation to fight against corruption and to assist in revamping the economy in the interest of this nation.

'It is in order to secure the economy all over because the judiciary has a big role to play in every aspect of our lives,' he said.