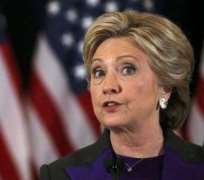 “About 6:30 this morning she called an old friend,” he began on “The Steve Malzberg Show” in an interview. “She was crying, inconsolably.

“She couldn’t stop crying.
“Her friend said — her female friend from way, way, back — said that it was even hard to understand what she was saying, she was crying so hard.

“This is Hillary we’re talking about,” Klein said.

“Eventually,” he continued, “her friend said she could make out that she was blaming James Comey, the director of the FBI, for her loss — and this I don’t understand exactly — and the president of the United States for not doing enough.”

“She said: ‘Well, she felt, Hillary felt, that the president could have stopped Comey a long time ago, because that’s what [former President] Bill [Clinton] said.”