My govt was toppled by corrupt officers in 1985 – Buhari 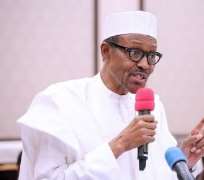 President Muhammadu Buhari on Monday said he was removed from office by some corrupt, senior military officers in a coup that toppled his administration in August 1985.

After his overthrow, Buhari was put under house arrest for so many months until his release in 1988, after the death of his mother.

In a chat with The Interview, Buhari said he was overthrown because of his crusade against corruption in the military.

He said senior military leaders ousted him to save themselves from his wrath.

The president revisited the issue on a two-day working visit to Edo State.

Buhari said many had forgotten that he spent most part of his 40 months detention in the ancient city.

'Not many people may remember: I spent most of the 40 months of my detention, following the 1985 coup, in a small bungalow here in Benin,' he said.

Yesterday, after inaugurating a remodeled 200-bed capacity ultra modern central hospital, which the administration of Governor Adams Oshiomhole, the outgoing governor, built in Benin, Buhari said he was impressed with the edifice.

The president also noted that it was 'the best way to do things and the best thing to do for the people' by any government.

He also inaugurated the Upper Siluko Road in the state capital and said 'the road will stand the test of time.

'Oshiomhole could have built a new Government House but, he chose to construct roads for his people.'