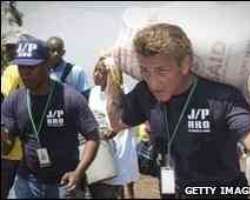 Hollywood actor Sean Penn has been ordered to perform 300 hours of community service following a spat with a photographer.

Penn, who was not in court, pleaded no contest to vandalism after being filmed attacking the paparazzo last year.

He will also be subject to three years probation and have to undergo 36 hours of anger management counselling.

Penn, 49, will be able to complete his community service working for his Haiti charity.

Reduced charge
He was originally charged with misdemeanour battery and vandalism, which could have led to an 18-month jail term.

But the plea bargain saw the charges dropped to misdemeanour vandalism, which could again be reduced to disturbing the peace if he complies with the court's punishment.

His lawyer, Richard Hirsch, said: “Prolonging this matter in the court system would not have been in Mr Penn's best interests and would have distracted from his charitable commitments, specifically his work in Haiti.

“Accordingly he has decided to accept the terms and move on.”

Penn, who won his second Oscar last year for Milk, was sentenced to 60 days in jail in 1987 after attacking a photographer on a film set.

He was also involved in an altercation with a member of the paparazzi at the funeral of his brother Christopher in 2006.