The Role Of Emotion In Deciding Elections 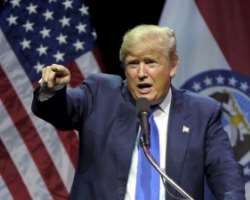 The idea of the mind as a cool calculator that makes decisions by weighing the evidence bears no relation to how the brain works and when political candidates assume voters dispassionately make decisions based on issues, they lose. Those are not my words. Rather they are those of Drew Westen in his book, “The political mind”. The point he was trying to make is that, in politics, ‘when reason and emotion collide, emotion invariably wins’.

Again according to Mr. Westen, ‘elections are decided in the market place of emotions, a marketplace filled with values, images, analogies, moral sentiments and moving oratory, in which logic plays only a supporting role’.

If the above thesis is correct, it is therefore not difficult to understand why despite all we know and have now discovered about the racist, sexist, misogynistic, predatory and hateful side of Donald Trump, the Republican candidate in the U.S Presidential elections, 40% of the American electorate intend to vote for him on November 8. Science being the untidy business that it is because you don’t expect all your hypothesis to pan out, psychologists have proven that political partisans when faced with potentially political information, some degree of distress emerges.

The brain registers the conflict between data, evidence, and desire and begins to search for ways to turn off the spigot of unpleasant emotion. Partisans are found to partly or mostly deny that they had perceived any conflict between their candidate’s words and deeds, hence the brain manages to shut down distress through faulty reasoning as best it could. This is what is going on today with Trump supporters.

Their sense of reasoning, of justice, of equity, fairness and the truth has been supplanted by emotion, and their perception of being victims of the media elite, the liberal bourgeoisie, immigrants, and their sense of entitlement. All of which they feel has been upended and challenged by a growing population of immigrants, blacks, Hispanics and people of other races.

Trump to them is their Molotov cocktail with which they can burn down all that has stood in their way of a better life for them and their children. They see the Trump campaign slogan, “Make America great again” as an opportunity to reclaim their lost glory and privileges as an entitled and pre-eminent race in the country.

Now does this thesis in any way apply to Nigeria political and electoral experience and process? The answer is yes with some variance. The variance lies in the area of ethnic loyalties, affiliations, and religion, all of which seem to hold more sway on our voting behavior and preferences much more than emotion.

In Nigeria, we have over the years have grown accustomed to thinking about politics in terms of the Moslem North and the Christian South, but in doing so we tend to forget the role of emotion. The APC and Buhari understood this well, probably on the advice of their American Political consultant, David Axelrod who was the strategist for the Obama campaign.

What Buhari did was to refuse an invitation to participate in a Presidential debate with Jonathan, fully aware that Nigerians were less interested in policy proposals but rather on a set of positive associations and narratives with him regarding his reputation as an anti- corruption crusader.

His past achievements or reputation in this area created in voters, a vivid, multisensory network of associations –associations not just to the word ‘corruption’ but to the visual of corrupt politicians in handcuffs being arrested, tried and locked up in jails. So the APC strategists just like their Republican counterparts here in the United States recognized that “the road to victory is paved with emotional intentions’.

They discovered also that voters, despite all their dispassionate economic concerns would still be drawn to Buhari because they identified him as someone who would eradicate corruption and loved his emphasis on the issue. They also trusted him and found him authentic in his beliefs. It did not matter that some disagreed with most of his religious beliefs on sharia and religious freedom. Buhari’s appeal was not based on its logical policy pronouncements but on emotional heartstrings.

His appeal was their emotions and as Mr. Westen enunciated in his book, ‘every appeal is ultimately an emotional appeal to voter’s interest- what is good for them, their families, and their values. In my opinion what also matters is whether the appeal is a strong or weak one. Buhari’s promise to fight corruption was an emotional appeal that resonated with a significant section of the population. As the philosopher, David Hume once opined, ‘reason is a slave to emotion and not the other way round’.

As a matter of fact in a dozen different state campaign events, Buhari spent less than two minutes on the podium during each campaign event enunciating any of his policies. All he did was raise his broom in the air, scream ‘change’ and then leave. He hardly said anything about how he was going to fix the economy, construct new roads, create jobs, fix the country’s electricity problems etc, and it worked out for him in the end because reason took a back seat to emotion amongst his supporters.

Some people wonder how Trump is still in the American Presidential race despite all that is said about his temperament, predatory behavior, lies, vile comments and racist tendencies? What they fail to realize is that a campaign strategy that focuses on facts, figures, policy statements, costs, and benefits and appeals to intellect and expertise do not work all the time. The essential truth is that Trump is appealing to the emotions of people who feel left behind in the new economy and globalization.

People who feel their leaders or the political establishment in both parties have forgotten them. People who have lost their factory jobs that does not require much more than a high school education but which on the other hand pays well but have moved to other countries. People who feel their country is being taken away from them by immigrants.

These people are angry voters and their emotions run high so much so that they find Trump's message of making America great again appealing. However, studies have also shown that emotions and emotional appeals can also play both ways. As much as it can make voters vote for a particular candidate, a lack of it can also work against a candidate.

It is the reason why a voter might say, even though I agree with his policies I still do not like him as a candidate, hence I will vote for his opponent. To some extent, this might explain the lack of support for Buhari amongst voters in the South East, many of whom loved his promise to fight corruption but were emotionally detached from him.

In civilized democracies and indeed in every democracy, the attention to policy is the stuff of good governance and under the right circumstances even voters without much interest in politics will think about what they have heard, consider the differences between two or more candidates or policy positions and deliberate –if only long enough to draw an emotional conclusion or do I say a reasoned decision. The essential truth is that voters do not pay attention to arguments about policy unless those policies engender their interest, enthusiasm, fear, anger or contempt in addition to an emotional attachment to that candidate.

What Trump, for instance, has done is to create a perfect storm of anger amongst his supporters especially against immigrants, promising them he will build a wall if he wins to keep these millions of immigrants who in his opinion are rapists, criminals, and crooks out.

It is the reason why voters from areas referred to as the steel and coal country here in the United States who have lost their jobs due to the closings of steel and coal factories feel and emotional attachment to Trump who has promised to bring back those two industries and consequently will vote for Trump.

The downside to the pre-eminence of emotion in influencing how people vote is that in some cases, it results in ‘buyer’s remorse’. People come to regret the way they voted, when the reality of their economic situation sets in, as well as the realization that elections have consequences, sometimes for themselves and sometimes for their communities, states or nation.

A good example was the Brexit vote in Britain, where after voting to leave the European Union most voters came to regret their voting decisions when the consequences of their action became apparent a day after the election. The same can be said of Nigeria where most voters except those in the north as much as they applaud the fight against corruption are beginning to regret not seeking more information from the President on what he was going to do about the economy.

The same thing is going to happen here in the United States if Trump wins on Tuesday, Nov 8 considering that most of the country and indeed the entire world is holding its breath regarding the U.S election. In two days the U.S election will be over but unfortunately, the long national emotional nightmare will continue, because not only have their emotions, fear, anger, and distrust been stretched to the limit but also because the country is sharply divided and it would take quite some time for them to exorcise their political demons.

Disclaimer: "The views/contents expressed in this article are the sole responsibility of the author(s) and do not necessarily reflect those of The Nigerian Voice. The Nigerian Voice will not be responsible or liable for any inaccurate or incorrect statements contained in this article."
Articles by Nnanna Ijomah
18-1-2017  Nigeria: A Nation Of Cowards And Docile Citizens12-10-2016  Buhari: Enough Of The Blame Game13-9-2016  Why The North Is Scared Of Restructuring6-9-2016  Nigeria: A Divided Nation In Denial Of Its Fragility24-7-2016  The Igbo’s: Only A Fool Breaks His Own HeartMore...