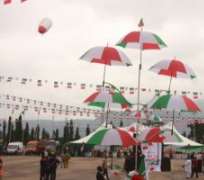 The Peoples Democratic Party, PDP, in Rivers State says the reluctance and dismal silence over several high profile allegations of financial recklessness, diversion of public funds for private use while he served as Rivers State Governor and attempts to bribe some justices of the Supreme Court to thwart the course of justice against the Minister of Transportation, Rotimi Chibuike Amaechi, is an eloquent testimony that the All Progressives Congress, APC-led federal government is not sincere in its anti-corruption policy or at best, treacherous in its pursuit.

APC’s Muhammadu Buhari defeated PDP’s Good Luck Jonathan, who was the incumbent President during the election. Buhari’s administration has since swooped on many officials of the former administration who were allegedly involved in massive corruption.

A statement by the State PDP Chairman, Bro Felix Obuah said if the APC leadership were sincere and serious to fight corruption in the country, people like Rotimi Amaechi would not be part of the government.

But rather than investigate the former Rivers State governor over the myriad of criminal allegations against him, including the recent issue of attempting to dissuade Supreme Court Justices to compromise justice in the Rivers State Governorship election appeal, these high level cases have been swept under the carpet.

Worse still, the APC has turned round to allege that the shocking revelations by the two Supreme Court justices, of how Amaechi unsuccessfully tried to influence their judgment in the Governorship election appeal, were mere attempts to rope Amaechi in at the behest  of Governor Nyesom Wike and some other chieftains of the PDP.

From the way and manner the APC has cautioned to carry on with the anti-corruption fight, the persons involved and their political affiliations, defiance to Court Orders and acts of lawlessness applied, there is no gainsaying the fact that the APC is reprobate.

Being selective in the prosecution of the accused persons and the total exclusion of political office holders under the APC from the searchlight of the Economic and Financial Crimes Commission, EFCC, and other security agencies clearly exposes the federal government's double standard in the entire affair.

Bro Obuah insists the allegations against Rotimi Amaechi by the two honourable Justices of the Supreme Court are weighty enough to make Amaechi step down as a member of President Buhari's cabinet while he is subjected to unhindered investigations.

“No amount of sponsored media hype will be enough to provide shield for Amaechi. Rather than postpone the evil day, Amaechi should better submit himself for investigation because the records will remain even after the Buhari regime is over,” the State PDP boss declared.

Bro Obuah appealed to the innocent PDP chieftains, notably Gov Nyesom Wike, the Senate minority leader, and immediate past governor of Akwa Ibom State, Senator Godswill Akpabio and the incumbent governors of Akwa Ibom, Cross River and Delta States not to be distracted by the antics of the APC and these Amaechi's protégés, stressing that as usual, time shall vindicate them.

Although most Nigerians agree on the need to sanitize the country of corruption, there is a growing consensus that Buhari’s administration has closed its eyes to cases involving senior members of his administration and party.