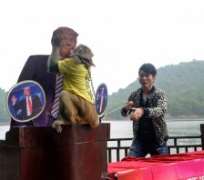 With U.S. polls yo-yoing and conspiracy theories swirling on both sides of the political spectrum, some of the smartest people in politics are at a loss in predicting the outcome of Tuesday's presidential election.

So, since people can't seem to predict the most epic election in U.S. history, why not let animals give it a shot?

Thankfully, the Shiyanhu Ecological Tourism Park in China's Hunan province had the same idea, and decided to roll out their not-so-secret weapon for unmasking the future: a Chinese monkey described as the “king of prophets,” according to Agence France-Presse .

His name is Geda, and local legend has pegged him as a mystical monkey with prophetic insight — one with an impressive record of correctly predicting the winners of European soccer matches.

This time, Geda was asked to predict the winner of the U.S. presidential election and — unlike many a highly-paid pollster — he did exactly that, AFP reported, and with absolute conviction, going as far as planting a smooch on the winner's face.

“After 'deliberate thought,' the mystic monkey chose Mr. Trump, Shiyanhu Ecological Tourism Park said on Thursday,” according to AFP. “Without even waiting, he congratulated the cardboard candidate with a kiss on the lips.”

The Chinese news media is playing close attention to the U.S. presidential election because of the damning fodder it has provided the state-run propaganda machine, according to AFP .

The tumultuous, insult-laden election cycle has offered the closely-monitored Chinese media a rare opportunity to disparage America's democratic traditions and the leaders who normally promote them.

“ 'The innumerable scandals, rumours, conspiracy theories and obscenities make it impossible for a person to look away,' the official Xinhua news service wrote in a commentary last week, likening the 2016 election to a train wreck,” AFP reported.

The AFP didn't clarify whether Geda, the soothsaying simian, was intended as a mockery of American politics or merely a promotional tool for the ecological park that organized his appearance. He may be special, but he's not unique. The monkey's extrasensory insight is supposedly shared by other animals around the globe who have been asked to predict high-pressure sporting events and political elections.

In 2012, according to the Raycom News Network , a 9-year-old squirrel named Gnocchi was asked to predict the outcome of the U.S. presidential election after correctly identifying the winner four years earlier. On his second try, Gnocchi failed, eating nine peanuts from a bowl representing Mitt Romney and only five from an President Obama bowl.

Perhaps the most astute animal psychic in recent memory is Paul the Octopus, a cephalopod who correctly predicted the results of all eight soccer games played by Germany in the World Cup in South Africa in 2010, AFP reported. Paul — who made his predictions by selecting a mussel in a box draped in each country's flag — even selected Spain over the Netherlands in the World Cup final.

Paul, the eight-armed native of Weymouth, England, didn't initially reveal his supernatural talent at the Sea Life Centre where he was born, his caretakers told the Daily Beast in 2014.

After he was transferred to Sea Life Oberhausen, an aquarium in Germany, his powers became manifest, the Daily Beast reported. Eventually, a German TV station began broadcasting each selection, turning Paul into an immediate celebrity.

“He never made any predictions while he was living here, but maybe he was waiting for a big event like the World Cup until he revealed his abilities,” said Fiona Smith, a Sea Life Centre employee.

Paul “died peacefully of natural causes” in 2010,  Der Spiegel wrote in a 2010 obituary highlighting the animal's rise to international fame.

“There was a one in 256 chance that he would get all eight predictions right,” the paper reported. “Paul’s success rate confounded mathematicians, angered bookmakers and spooked hundreds of millions of football fans around the world.”

“Paul delighted people from all continents with his seven consecutive correct predictions for the matches of the German national team and for the final,” the aquarium's general manager, Stefan Porwoll, told the paper. “He was dear to all our hearts and we will sorely miss him. He died peacefully in the night of natural causes. It is a comforting thought that he had a good life with us with the best possible care delivered by a committed team.”

By 2014, people around the world began turning to animals to predict World Cup games, including an elephant, a cow, a Bengali white tiger, a Japanese otter and a Brazilian turtle, according to the Guardian .

Not to be forgotten was Shaheen, a “clairvoyant camel” in Dubai who, at one point, was “19-of-29 on his World Cup picks, giving him a respectable 66 percent success rate,” according to Bleacher Report .

More recently, a group of orphaned dogs in Cleveland, were asked by Cleveland.com reporters to choose between Clinton and Trump by selecting presidential chew toys in a “highly unscientific poll” that still bears some resemblance to a real-life election cycles.