$2.2b arms scam: Jonathan ready to testify in court 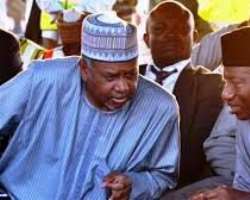 Former President, Dr. Goodluck Jonathan, is ready to appear to testify in the ongoing trial of his former National Security Adviser, Col Dasuki,.

Jonathan had earlier given an indication of his feeling about the trial when he faulted the charges slammed on Dasuki, claiming that the ex-NSA could not have stolen $2.2billion.

He was quoted to have said, “We bought warships, we bought aircraft, and we bought lots of weapons for the army. It's not possible that he stole $2.1 billion.”

Vanguard quotes the ex-NSA's counsel, Mr. Ahmed Raji (SAN), as saying  Tuesday that, “Dr. Goodluck Jonathan will testify in court. He is one of those who will testify and that the statement he made in London appears to be the first phase of the war chest of the ex-NSA.”

“You know the ex-NSA said he acted on Jonathan's instructions in disbursing some of the cash, and from the look of things, the ex-President is now ready to accept responsibility for whatever Dasuki did. So far, we have secured the consent of Jonathan to appear in court for Dasuki. This will make the trial worth it.”

He also said, “Dasuki has a list of highly-placed beneficiaries from the arms cash. A particular traditional ruler got about N500million as a gift from the government through the Office of NSA. There are many hidden beneficiaries whom Nigerians must know. Nigerians will be shocked by some revelations. Nothing short of open trial will let Nigerians know the truth. We are ready for this.”