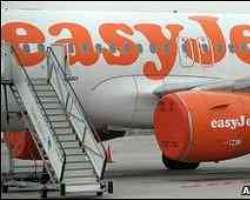 Easyjet has been hit by disruptions from volcanic ash and snow

Low-cost airline Easyjet has said the disruption caused by the recent volcanic eruption in Iceland will cost it between £50m and £75m.

The cost means the airline has lowered its profit forecast for the full-year to between £100m and £150m.

Meanwhile, TUI Travel said the ash disruption had cost it £90m, as it reported a six-month loss of £367m.

The deficit was worse than the £333m loss it recorded a year earlier, but Europe's biggest travel operator said the performance was in line with expectations.

Flight disruptions
As well as reporting smaller losses, Easyjet said revenue for the six-month period increased to £1.2bn from £1bn a year earlier.

The company also said it had increased its market share of short-haul flights over the past 12 months to 7.6%, up from 6.5% in the previous 12 months.

It said it was in the process of seeking compensation from governments for the additional cost and lost revenues incurred due to the five-day closure of European airspace.

The airline also said it had been hit to the tune of £21m by the “exceptional snowfall” in December 2009 and January 2010.