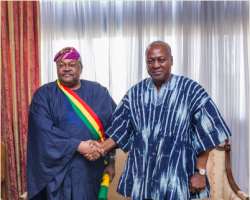 The Chairman of Globacom Limited, Dr. Mike Adenuga Jr. has bagged the highest civil award in Ghana on the strength of his contribution to the growth and development of telecommunications across Africa.

Dr. Adenuga was formally decorated with this honour by President John Mahama on Saturday, 29th of October, 2016 at the Accra International Conference Centre.

The President said the business mogul was selected for the prestigious award of “The Companion of the Star of Ghana (CSG)” in recognition of his immense contribution to the economic growth of Ghana and his continent-wide investments.

“This Award is in recognition of your unique and outstanding contribution to business enterprise both in Ghana and the continent of Africa at large,” Ghana president said.

President Mahama said Dr. Adenuga has touched many lives through his creative exertions.

“You have provided employment for our teeming youth, artists, footballers and many more. I am particularly proud of you. This award is our way of saying a simple Thank You”, the President said.

Dr Adenuga’s citation commended his “transformational achievements in the telecommunications industry”, chief of which included the laying of the Glo 1 optic fibre cable linking several African countries including Ghana with Europe and America.

President Mahama commended Dr Adenuga’s decision to be associated with Ghana by way of investment in telecommunications in Ghana since Glo Mobile’s launch. He lauded the massive capital investment. The President noted that Dr Adenuga, apart from his business investments, has been a very strong supporter of sports across the continent, noting that these have continued to earn him honours from all over.

In his remarks, Dr Adenuga expressed joy at President Mahama’s “recognition and support of my modest contributions to the development of Ghana’s economy” and averred that these “have come as a great source of pride and encouragement to me. This is more so as it is coming from Your Excellency, whose sterling qualities of leadership I admire greatly”.

During Nigeria’s 50th anniversary celebration, Adenuga was one of the 50 pre-eminent Nigerians who were conferred with the Special Golden Jubilee Independence Anniversary Awards by the Federal Government of Nigeria.

Apart from these, Dr. Adenuga was named the African Telecoms Entrepreneur of the year for his courageous and rapid investment in the telecoms sector. He has been named as the ‘Man of the Year’ by most of the notable newspapers in Nigeria, including the highly regarded Thisday newspapers.

Over and over again he has been voted Nigeria’s Most Outstanding Business Personality over the last 30 years. He continues to exert positive influence on the business sector, within and outside Nigeria.