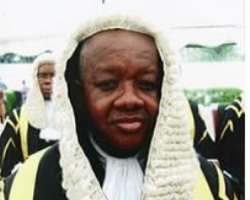 Justice Adeniyi Ademola of a Federal High Court,  Abuja, on Thursday withdrew from handling a case of terrorism filed by the Department of State Services (DSS).

The case is against one Haruna Abbas and two others.

Ademola said at the mentioning of the case that it would not be fair for him to continue with the case.

He announced that he would return the case file to the Chief Judge of the Federal High Court, Justice Ibrahim Auta, for reassignment.

'The matter was here last on June 13, and it involves the DSS; I don't want to handle any of its matters anymore.

'In the interest of fair hearing, I think I will move the file to another court because it will not be fair to me and to DSS.

'So, I will return the file to the chief judge to reassign.

'The case file is hereby returned to the chief judge for reassignment to another judge on personal grounds,' he said.

However, one of the accused, Abbas, prayed the judge not to withdraw from the case.

Abbas said that he and his co-accused would prefer to be tried by Ademola.

Ademola had on Oct. 18 withdrew from a case brought against a former National Security Adviser, Sambo Dasuki, by the DSS. - NAN.