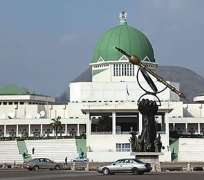 The Senate, on Thursday, passed a bill amending the Code of Conduct Bureau and Tribunal Act, which transfers the controlling powers of the bureau and the tribunal from the President to the National Assembly.

As part of the amendment, the CCT shall be made up of the chairman and four other members, with three of the five forming the quorum at every sitting.

The lawmakers, however, allowed the President to maintain his power of appointment into the CCB.

The House of Representatives had passed the amendment bill in May 2016 and sent it to the Senate for concurrence.

The Chairman, Senate Committee on Ethics, Privileges and Public Petitions, Samuel Anyanwu, while laying a report on the concurrence amendment bill on the floor of the chamber during Thursday's plenary, recalled that the Senate referred the bill to the committee on October 13, 2016, 'for critical examination.'

He admitted that a similar amendment bill was introduced in the Senate earlier in the year, which generated political tension that forced the lawmakers to suspend the process.

According to report, the bill seeks to amend the Code of Conduct Bureau and Tribunal Act Cap. C15 Laws of the Federation of  Nigeria 2014.

Before the amendment, Section 18 of the CCB/CCT Act, which formed the crux of the amendment, stated that, '(1) The President may by order exempt any cadre of public officers from the provisions of this Act if it appears to him that their position in the public service is below the rank which it considers appropriate for the application of those provisions.

'(2)The President may by order confer on the bureau such additional powers as may appear to it to be necessary to enable it to discharge more effectively the functions conferred upon it under this Act.'

The amended version now reads, 'Section 18 (1) and (2) are amended by substituting 'President' with the 'National Assembly' and substitute in Subsection 1 'him' with 'it.''

But for the 'nays that had it' when votes were taken on the amendment to Section 4(2), the National Assembly would have taken the powers to appoint officials of the CCB from the President.

The proposed amendment read, 'The Principal Act is hereby amended in Section 4(2) by substituting the word 'President' with the words 'National Assembly.''

The Senate however rejected the amendment to Section 1 (2)(b) by the House of Representatives, which attempted to reduce the entry age of the chairman and members of the CCT from 50 years to 30 years. The senators voted that the status quo be maintained.

The debate on the amendment recorded more controversy when the senators got to Section 4(2) and Section 18(2), which divided the lawmakers on the floor of the chamber.

The Leader of the SUF, Ahmed Lawan (APC, Yobe-North), however, warned against the amendment process, noting that the legislature should make laws for the country and not in favour of individual lawmakers.

The Deputy Senate President, Ike Ekweremadu, however, stated that there was no ulterior motive behind the quick passage of the bill.

Senator Shehu Sani (APC, Kaduna-Central), however, said since the Senate had decided to discuss this bill, lawmakers should be allowed to do so.

Senator Barnabas Gemade seconded the motion but the nays had it, which signalled the continuation of the amendment