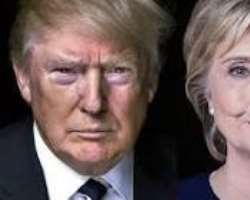 The USA Democratic Party’s presidential candidate, Hillary Clinton has soared to a 12-point lead over her opponent of the Republican Party, Donald Trump in the race for the White House, according to a new poll released Sunday, with the real estate magnate's support tanking among key voter groups.

The Republican presidential nominee has seen dismal poll numbers since a string of women came forward earlier this month to accuse him of sexual assault or inappropriate behavior in the past.

He has also stirred controversy by refusing to say that he will accept the result of the November 8 election no matter what, calling the process 'rigged.'

Clinton, the Democratic former secretary of state, leads 50 percent to 38 percent in a four-way contest with two minor party candidates, according to a national ABC News poll.

It was up from Clinton's four percentage point edge in an ABC News/Washington Post poll conducted 10 days ago.

Trump held a small 47-43 percent lead among white Americans, a group that Republican Mitt Romney won by 20 points in the 2012 election.

Republican candidates must have strong support from white voters if they want to win, with non-white voters overwhelmingly favoring Democratic candidates.

Clinton leads 55-35 percent among women, and has doubled her lead to 32 points among college-educated white women — a group strongly critical of Trump's response to allegations of inappropriate behavior.

The poll even showed Clinton leading for the first time among men, 44 to 41 percent — although that lead is within the poll's margin of error.

Team Clinton is hoping for a landslide win, even holding out hope of taking back control of at least one of the two houses of Congress from the Republicans.

'We're not taking anything for granted at all,' campaign manager Robby Mook told Fox News Sunday.

'Secretary Clinton at the beginning of this campaign said she wanted to help all candidates up and down the ballot. So we're running a coordinated campaign, working hard with gubernatorial, Senate and House candidates. But we're not — you know, this is not over yet.'

Early voting has begun in several states, and the initial details were positive, Mook said.

'We feel very, very good about what we've seen so far… And we're encouraged also by who is turning out.'

Trump has tried to change the narrative, on Saturday outlining his plan for his first 100 days in office, including a pledge to create 25 million jobs and cut taxes for middle-class Americans.

'The fact is that this race is not over,' Trump's campaign manager Kellyanne Conway told Fox News on Sunday, outlining a plan to win crucial battleground states.

Trump's son Eric said polls don't reflect the support of people who haven't been on voter rolls for years but will turn out on Election Day to support the populist candidate.

'I'm so incredibly proud. He's carried the weight of this country for the last 18 months. I happen to think we're going to win,' Eric Trump said on ABC. – AFP.