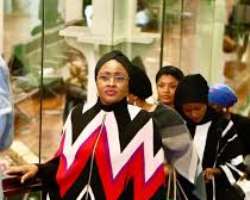 Aisha Buhari, wife of the president is in Brussels to attend a forum on

the role of women.
According to the first lady, “Heading to Brussels to attend a forum where

she said.
Clad in a fall free top and black slim fit trousers.

This would be her first public statement after her interview with the BBC.

The trip is a bold move to show that she’s not a woman in a kitchen. The

wife of the president has told close associates that she’s not a cook,

neither an ornament.
Pictures shows her holding her boarding pass and heading to the airport

shuttle train.
President Buhari’s comments about his wife belonging in the kitchen came

just three days after the International Day of the Girl Child,  meant to

focus on the plight of disadvantaged girls all over the world. Unicef

in Africa, with 23 million girls and women having been married in

childhood, with an Emir in Katsina the president’s state facing an