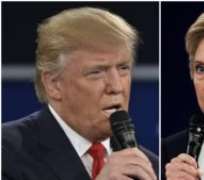 Despite saying how excited he was to “beat” Hillary Clinton yet again in their third and final presidential debate, Donald Trump seemed to suggest Wednesday that he might skip the Las Vegas face-off next week because of his frustrations with the Commission for Presidential Debates. “I have no respect for that group by the way,” Trump said Wednesday at a rally in Florida. “I’m done.”

He announced to the crowd that he’d “just found” out that the organization’s “head guy used to work for Bill Clinton,” suggesting the nonpartisan, nonprofit group that oversees the debates is biased. What Trump failed to note, however, is that the other co-chair of the commission is a former Republican National Committee chairman.