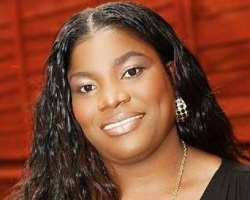 We reported here a few months ago that Egor won an Award Of Excellence in Hollywood and shared photos of her award and the event.

We are pleased to see that Governor Ayade really does have a sharp eye for talent and are excited to see how she handles it. Read her message below to Cross Riverians who want to be a part of Callywood.

For those who may not have heard of Egor Efiok, please click on the link below to read her full profile.

My name is Egor Efiok and I have just moved down to Calabar to take charge of Callywood.

I am here with some of my team from the UK and USA, respectively, to help discover and make stars here in Cross River State.

Many of you know about Hollywood Meets Nollywood film, Turning Point, and how I cast 2 Cross River State actors in it (Igoni Archibong and Ebbe Bassey) with Igoni playing lead alongside all the Hollywood actors. Igoni went along to win 2 Best Actor In A Leading Role Awards and travelled back to the US to receive his NAFCA trophy. I did a similar casting call before the shooting of Turning Point and that was how I discovered Igoni. This gave me the inspiration to keep trying to discover more stars in Cross River State and thankfully, our action Governor, His Excellency Ben Ayade, has an even larger vision for you all.

To inspire you further and to bring out the best in you, I will collaborate with Hollywood on every Callywood film that we make and ensure that the Callywood stars stand out and are recognised and acknowledged internationally. If you have watched Beast Of No Nation with Idris Elba playing a support role to the lead 12-year-old Ghanaian actor Abraham Attah, you will get my drift. This is your chance to prove that you have it in you.

I have several films written for Callywood right now and am ready to shoot. I just need you talented Cross Riverian stars. Let us flood the market with Callywood stars! Let's go there!!!

Auditions will take place at my office at Tinapa studio this Saturday, 28th May 2016. I look forward to meeting you all.