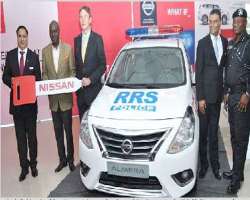 Nissan Motors, in collaboration with Stallion Group, on Monday donated a brand new Nissan Almera car to the Lagos State Security Trust Fund in appreciation of the organisation's effort in dealing effectively with the complex security challenges environment of Lagos State.

Mr. Parvir Singh, managing director, Stallion NMN, while making the official presentation in Lagos, said the donation is an expression of the automaker's corporate responsibility values of appropriating support to relevant agencies and organisations in Nigeria.

'Having followed the organisation's achievements in recent years, Stallion NMN in collaboration with our principals, Nissan South Africa are pleased to extend our hands of fellowship to the society that has made our business operations more secure and attractive. And, this is largely due to the activities of the Security Trust Fund in curbing the menace of crime in Lagos State,' he said.

Singh described the Lagos State Security Trust Fund as an organisation that has excelled in devising potent strategies to mitigate security challenges in Lagos State. He expressed the delight of Nissan sales and manufacturing company in associating with the goal of boosting security in Lagos State.

Nissan is reputed as an internationally acclaimed brand with key representation worldwide, the second largest automaker in Japan and the sixth largest in the world with over 5.4 million units sold worldwide in 2015. Its West African conglomerate, Stallion Group partnered with Nissan South Africa to form Stallion NMN in April 2013, which is presently the sole manufacturer, importer and distributor of Nissan products in Nigeria.

Stallion NMN has since established a motor assembly plant in Nigeria in response to the national automotive policy.

He said the company plans to expand local production in the future.

He expressed confidence that Nigeria would overcome its present economic challenges and the middle class market would become even more vibrant.

Also speaking at the event, Mr. Jimmy Dando director, sales and operations Nissan sub-Saharan Africa said 'Nigeria is Nissan's most outstanding market in Africa Growth strategy and we will exploit the country's strategic regional partners in the West Coast to make Nigeria the automobile hub for evolving West African markets.'

He said Nigeria's economy has strong potential of becoming Africa's wealthiest nation and its large and growing middle class constitute the core values that make the country attractive to Nissan.

'We will in collaboration with Stallion transform Nigeria into a notable manufacturing and distribution hub that can provide comprehensive range of passenger, commercial and recreational vehicles and gradually transform Nissan into one of the largest automaker not only in Nigeria but in the West Africa sub-region,' Dando said.

Nissan Motor Co., Ltd is part of the Renault-Nissan Alliance.

It delivers a comprehensive range of more than 60 models under the Nissan, Infiniti and Datsun brands. In 2010, the company introduced the Nissan LEAF, a shift into the zero-emission mobility, which has brought zero emissions motoring to the African continent.

The LEAF, described as the first mass-market, pure-electric vehicle launched globally, is now ranked the best-selling EV in history with almost 50% share of the zero-emission vehicle segment.

Dr. Abdurrazaq Balogun, executive secretary/CEO of Lagos State Security Trust Fund, while receiving the vehicle on behalf of the Fund, commended the Stallion and Nissan for making the donation at a crucial period in the country's economic history.

He assured that his organization wouldn't leave no stone unturned in realising the objectives for which the support has been given.

The Security Trust Fund was created in 2007 to assist security agencies in Nigeria to reach out to corporate organisations and individuals for support in creating a secure environment for business.