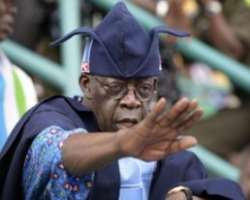 Following the simmering crisis in the All Progressives Congress, the National Leader of the party, Asiwaju Bola Tinubu, has started reaching out to his former political foes in the South-West in order to consolidate his influence in the region.

The multi-layered crisis in the ruling party is threatening the erstwhile chummy relationship between Tinubu and President Muhammadu Buhari.

The crisis in the ruling party started before the 2015 general elections but became full-blown after Buhari was sworn in as president. There has been discontent within the Tinubu camp. Sources said that members of the group and their principal were not happy with what they saw as attempts by the party leadership and the presidency to diminish Tinubu's premium contributions to Buhari's emergence as president and undermine the former Lagos State governor's leadership in his South-West power base.

But SUNDAY PUNCH learnt over the weekend that some of Buhari's closest associates have been pushing back by telling those who are close to Tinubu that Nigeria cannot have a 'co-presidency.'

Although the two leaders had tried futilely to keep the frosty relationship away from public knowledge, things came to a head a few days ago when Tinubu wrote an open letter lambasting the National Chairman of the APC, Chief John Odigie-Oyegun, who is believed to enjoy the support of the president.

Tinubu, who faulted the way the party's governorship primary was held in Ondo State, accused Odigie-Oyegun of conducting a fraudulent primary and he asked the former Edo State governor to resign as the national chairman of the party.

After the letter was published, Oyegun refrained from responding to Tinubu. But he later visited President Buhari in Aso Rock and photographs of the duo laughing and sharing banters was made public. Shortly thereafter, Oyegun replied Tinubu and described the latter's open letter as 'reckless.'

Until the recent crisis, the party had successfully managed the growing discontent within its leadership as insinuations were rife that some of Buhari's closest political associates had perfected a plan to destroy Tinubu politically.

But pro-Tinubu elements within the party and other sympathisers have vowed to resist any attempt to humiliate Tinubu.

Some of Tinubu's close associates spoke to SUNDAY PUNCH but pleaded anonymity because of possible reprisal.

A chieftain of the party in Osun State, said, “This is the beginning of the end of the APC. The party will shatter into smithereens. We are ready for them. They are going nowhere.

“We know the political leader of the South-West and that person is unmistakably Asiwaju Bola Tinubu. They are envious of Tinubu's achievements, but they don't have Tinubu's clout. None of those scrambling to wear Tinubu's shoes have the clout to do so. These ingrates are the people that have benefitted immensely from Tinubu's large-heartedness. Now, they are stabbing him in the back. We are in the South-West together, we shall see.”

Speaking in a telephone interview with one of our correspondents on Friday, Ekiti State Governor, Ayodele Fayose, said he would not hesitate to fight against any anti-Yoruba policy by the Buhari-led administration. He said he would team up with like-minded leaders in the South-West to resist attacks on any of the region's political leaders. Fayose said, “I will resist any policy that is formulated by the Buhari administration against the interests of the Yoruba. Some people may say it is too early to criticise them now, so, we are watching.

“We will keep our fingers crossed and our gunpowder dry. We won't be hasty in our condemnation; when you put water on fire, you wait for it to boil. We don't want it to appear as if we are looking for an opportunity to nail them. Let them continue their governance, we are watching.”

A pro-Tinubu stalwart in the ruling party also told one of our correspondents that the plot to ridicule Tinubu and reduce his standing in the South-West had “already failed.”

Another top APC leader in the South-West told SUNDAY PUNCH that apart from trying to destroy his political structures, many in Tinubu's camp believe that one of the ways the national leader's opponents would attack him is to go after his business interests and associates.

“We won't be surprised if the Economic and Financial Crimes Commission wakes up tomorrow to say they are probing Tinubu or his associates. They may even send the Department of State Services after him because that is the step the Buhari government has taken against all their perceived enemies. Asiwaju knows that they may come for him.”

Similarly, a chieftain of the party said in a telephone interview on Friday that a former Governor of Osun State, Chief Bisi Akande, had warned Tinubu against the alliance with the North.

The chieftain said, “Baba Akande didn't like the idea of teaming up with the North. He had advised that the APC should concentrate on the South-West and seek ways to develop it massively.

“But the emerging political scenario at the time made the possibility of the Yoruba coming into the mainstream of Nigeria's politics a reality. Baba Akande was of the opinion that we should not participate in governance at the centre.”

“By sending the list to Asiwaju and Saraki at the same time, Buhari subtly undermined the promise he made to Tinubu because he knew that with the copy of the ministerial list in Saraki's hands, there was no way Tinubu could make any input into the list.”

A chieftain of the APC in Ondo also explained that Tinubu was deliberately undermined in the Ondo governorship primary with Abuja's backing of Mr. Rotimi Akeredolu (SAN), who emerged the winner of the primary.

It was gathered that Tinubu had reached out to prominent Yoruba leaders, such as Chief Ayo Adebanjo, Chief Mojisoluwa Akinfenwa, Chief Olanihun Ajayi, among others, in the bid to reposition himself and the South-West.

Also, it was gathered that an attempt at rapprochement was ongoing between Tinubu and the Ondo State Governor, Dr. Olusegun Mimiko.

It was learnt that some Yoruba leaders had volunteered to broker a truce between Tinubu and Mimiko as the echoes of their disagreement during the countdown to Mimiko's re-election is still fresh.

Osun State Governor, Rauf Aregbesola, a staunch Tinubu loyalist, is said to be the arrowhead of the move to reconcile Tinubu and Mimiko.

A top member of the APC, who is in the know of the developments, told SUNDAY PUNCH that it was public knowledge that Tinubu had been sidelined at the national level.

The source said, “Those leading the rebellion against Tinubu are politicians who lost their wards and constituencies in elections, even when they were governors. His loyalists are not in government, despite the contributions of Asiwaju to the 2015 electoral victory. Asiwaju has realised that they are ready to go to war with him so he is consolidating. This is not a time to hold on to past wounds and we are glad Yoruba elders who were critical of Tinubu before are rallying round him because they understand that this is a South-West matter. It is beyond our national leader.

“The elders have held several meetings with him and they are realigning. Don't forget what Pa Ayo Adebanjo said; he said any insult to Asiwaju is an insult to the Yoruba race and Adebanjo is not known to be flippant in his choice of words.”

Also, a former leader of the Yoruba socio-political group, Afenifere, told our correspondent in confidence that Tinubu had reconciled with some Yoruba leaders. He said the former Governor of Lagos State now needed the leaders in the ongoing political realignments in the South-West.

The source said, “I am aware that they (leaders) have held meetings.  One of such meetings was held in Asiwaju's home. The 2015 electioneering was a solo game for Tinubu. The Yoruba leaders did not agree with him on the formation of the APC and the choice of the presidential candidate (Buhari). Now that the game is turning against him (Tinubu), he has to manoeuvre. However, I'm not sure that all the people he is realigning with can help him.”

Another Yoruba leader confirmed that some Yoruba leaders, who were opposed to Tinubu up till the 2015 elections, had been holding meetings with him lately.

The ex-Afenifere chieftain said, “The whole thing is shocking to some of us. How come those who knew all Tinubu did to them politically have suddenly made a U-turn in an attempt to save him from the onslaught on him in the APC?”

A founding member of the Obafemi Awolowo-led Yoruba socio-political organisation, Sir Olaniwun Ajayi, confirmed to SUNDAY PUNCH that the leaders of the region met with Tinubu recently. He stated that the meeting was to reconcile all political divides in the South-West and chart a common course for the Yoruba race.

The nonagerian had in an earlier interview with SUNDAY PUNCH strongly criticised Tinubu and other governors of the Alliance for Democracy, a party founded by Afenifere leaders, alleging that the governors dumped the AD after gaining power and went ahead to form the Action Congress. He further alleged that the same group of governors, led by Tinubu, destabilised Afenifere for political reasons.

Speaking to our correspondent on Friday, Olaniwun said, “Yes, we had a meeting with him in the recent past. Yes, the meeting was about the Yoruba coming together for the benefit of the Yoruba nation. We have for long been on our separate ways, which is not good for the Yoruba nation. We went to him and the Governor of Lagos State (Akinwunmi Ambode); we met the two of them together. We decided to see (meet with) the former governors and the current governors.”

When asked if Afenifere leaders had forgiven Tinubu, whom they had always accused of leading the rebellion against the group, the elder statesman said, “He has not offended me, if you are referring to me as a person.”

Olaniwun denied that the reconciliation was to protect Tinubu politically.