9 Signs That The ‘Nice Guy’ Isn’t Actually That Nice 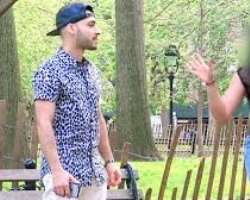 Finding a nice guy without red flags is a priority for a woman, as you venture into relationships. But the unfortunate “nice guy syndrome” happens when you've been duped into thinking you've met a nice and genuine man who ends up being a major man-hood. Here are some signs that he might not be as kind-hearted as he's making himself out to be

1. He feels the need to bring up constant reminders of how nice he is – as if he always is trying to prove something. Generally, people that are faking it tend to go the extra mile, in that sense.

2. He compares himself to other guys who are assholes, and makes himself a saint in comparison. Yeah, right. Especially a red flag if he talks about how frustrating it is that girls always fall for “the bad guy”. Yup, a wolf in sheep's clothing.

3. He lets you decide everything. This might seem cute in the beginning, but the inability to make his own decisions, and always agrees with you means that he's suffering not just from nice guy syndrome, but lost boy syndrome, an equally annoying situation to face as a woman.

4. He talks shit about his exes – showing he's clearly not the bigger person. A mature and nice guy knows not to talk badly about his ex and convince that he's some sort of pitiful victim. He'll probably talk shit about you once you break up as well!

5. Or he talks badly about other women generally. If he's willing to talk shit and engage in petty cattiness with you rather than trying to get you to simmer down and namaste, that gossipy trait might mean he's not so nice after all.

6. He avoids confrontation, but in a passive aggressive way. He tries to stay neutral, but it costs your needs and desires. He ends up avoiding with disagreements rather than dealing with them head-on, as you need to with a partner.

7. When things don't go his way, it's a my way or the highway attitude, this inability to compromise means that he's really not a nice guy.

8. He has been in the friend zone a lot, and refers to it as the friend zone. Men who feel sorry for themselves when their platonic girl friends don't have reciprocated females use the words “friend zone” and are prime example of male fragility.

9. He does and says a lot under the guide of humor, including making excuses. If you see him making rude comments or playfully commenting on how you take things too seriously, that funny gene might just be an asshole gene.